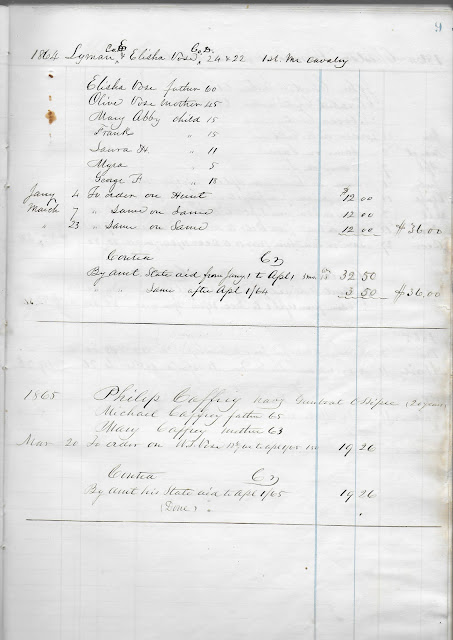 Found on numbered page 9 - with the account of Philip Caffrey in the lower portion of the page - in a ledger of Robbinston, Maine, financial transactions from the mid 1860s to the 1870s.

Both Lyman and Elisha, Jr., survived the war, as did their father Elisha, who served in Company D of the 1st Maine Cavalry and was wounded at Shepherdstown, Virginia, on July 16, 1863.  Worryingly, a similar record of injury on the same date at the same place appears for Elisha's son Elisha, Jr. Perhaps the records were accidentally conflated or perhaps they were serving together and both wounded in the same battle, with the elder Elisha returning home to Robbinston.

This record from the United States Veterans Administration Pension Payment Cards indicates that Lyman rose from a private to a sergeant in Company E of the 1st Maine Cavalry.  Another such record indicates his death on 9 February 1929.

Elisha Vose, Jr. (1841-1896) -  Either Elisha was wounded at Shepherdstown, Virginia, on the same day as his father, or some of their records have become conflated.  Elisha, Jr.'s Find a Grave memorial indicates that he had married a Charlotte/ "Lottie".  She may have been the "Widow Lowe", whom Elisha married in St. Paul, Minnesota, mentioned in this necrology in the Maine Bugle, Volumes 4 and 5, published in 1897.

If you have information on the family of Lyman Vose and Elisha Vose, please leave a comment or contact me directly.