1864 Payments On Behalf of Family in Robbinston, Maine, of Civil War Soldier Joseph E. Tucker; in 1860s/1870s Ledger of Financial Transactions of Robbinston 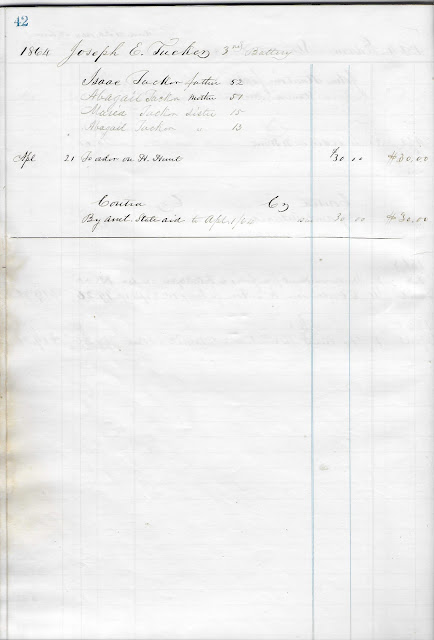 Joseph E. Tucker; then serving in the 3rd Maine Battery; payments made in 1864 on behalf of his family in Robbinston, Maine.

Found on numbered page 42 in a ledger of Robbinston, Maine, financial transactions from the mid 1860s to the 1870s.

Note a few discrepancies in the records below.

1870 - US Census of Princeton, Maine - Joseph E. Tucker - surname is mangled; look under the boarding house of Francis J. Richardson - should be Frances J. Richardson, female

1880 - US Census of Hinkley Township in Washington County, Maine - Joseph E. Tucker, working as an engineer; wife Dora and daughter Eva.  In the area near Grand Lake Stream, Maine, presumably with a railway where Joseph worked.

1910 US Census of Meddybemps, Maine - Joseph E. Tucker, Dora, a daughter and a son

If you have information on the family of Joseph E. Tucker, please leave a comment or contact me directly.