1864/1865 Payments on Behalf of Family in Robbinston, Maine, of Civil War Soldier John M. Bean; in 1860s/1870s Ledger of Financial Transactions of Robbinston 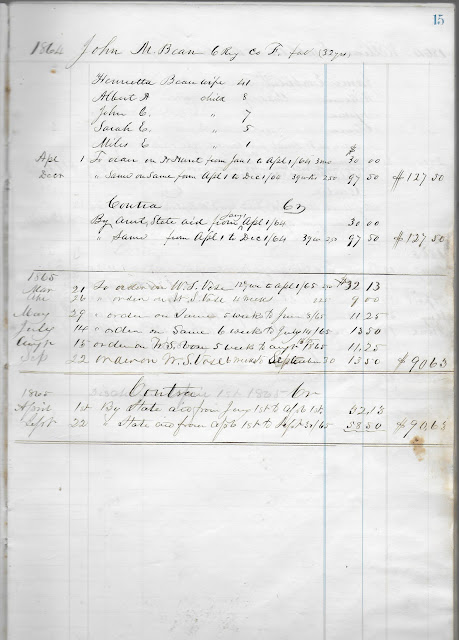 Found on numbered page 15 in a ledger of Robbinston, Maine, financial transactions from the mid 1860s to the 1870s.

According to a record in Maine, Veterans Cemetery Records, 1676-1918, John M. Bean was born in 1832 and died on 15 September 1905. He enlisted on 9 September 1862 at Augusta, Maine, and was discharged on March 25, 1865 from Company G of the 6th Regiment Infantry, Maine Volunteers.  An additional comment noted that he was wounded on 9 November 1863 and was discharged for disability - apparently not removed from the rolls right away or able to serve in a diminished capacity.

The 1900 US Census of Calais, Maine, notes that John and Henrietta married about 1854.  In 1900, one of their children, Miles E. Bean, an electrician, was still living in his parents' household.

John's death record in Maine Vital Records, 1670-1921 notes that he died of a cerebral hemorrhage and that he was the son of Luther Bean and Persis (Stanhope) Bean.  The veterans record cited in the previous paragraph notes that John was buried in Calais, Maine, Section 21, R81, Lot 5.

If you have information on the family of John M. Bean and Henrietta (Laskey) Bean, please leave a comment or contact me directly.

Posted by Pam Beveridge at 7:41 AM