1864/1865 Payments on Behalf of Parents in Robbinston, Maine, of Civil War Soldier Frank R. Leach; in 1860s/1870s Ledger of Financial Transactions of Robbinston 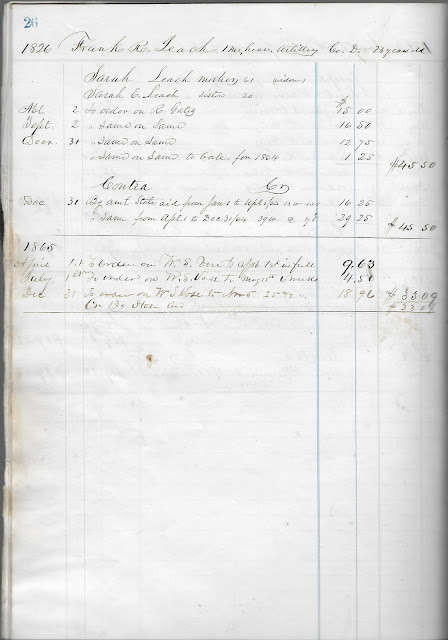 Frank R. Leach, age 23; then serving in Company D of the 1st Maine Heavy Artillery; payments made in 1864 and 1865 on behalf of his mother and sister in Robbinston, Maine.

Found on numbered page 26 in a ledger of Robbinston, Maine, financial transactions from the mid 1860s to the 1870s.

Frank has FindaGrave memorials for sites in both Leavenworth, Kansas, where he was living in the Home for Disabled Volunteer Soldiers until his death in 1917, and Robbinston, Maine, where his family is buried. Either his body was brought home and reinterred in Robbinston at some point, or the marker in Robbinston is a cenotaph.

Mary Amelia (Pettigrove) Leach (1845-1888), a native of New Brunswick, Canada, was the daughter of Capt. Joshua Pettigrove and Pamela (Hewes) Pettigrove.  Frank and Amelia had 3 children, one of whom died fairly young.

If you have information on the family of Frank R. Leach, please leave a comment or contact me directly.