1864/1865 Payments on Behalf of Family in Robbinston, Maine, of Civil War Soldier Thomas Chester; in 1860s/1870s Ledger of Financial Transactions of Robbinston 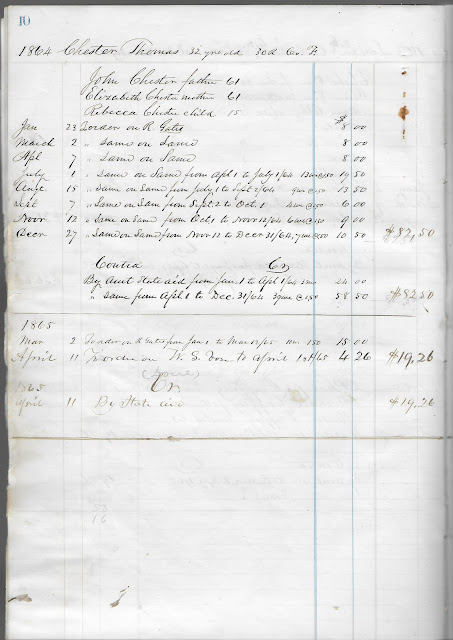 Thomas Chester, age 32, serving in Company F of the Maine 30th Infantry Regiment: payments made in 1864 and 1865 to his parents and sister in Robbinston, Maine.  Unlike the format of most of the entries, Thomas' name was listed surname first.

Found on numbered page 10 in a ledger of Robbinston, Maine, financial transactions from the mid 1860s to the 1870s.

In Thomas Chester's petition for naturalization, dated 18 December 1854, however, he states that he was born in St. Andrews, New Brunswick, on 25 December 1831.  He came to the United States in 1837, presumably, with his family to Robbinston, Maine. Bernard Foley of Roxbury, Massachusetts, and James Edwards of Boston stated that Thomas had lived in Boston for six years.

Thomas may have been the Thomas Chester - in a record in the online database U.S., Civil War Soldier Records and Profiles, 1861-1865 - who was 31 when he enlisted in Company F of the Maine 30th Infantry Regiment on 4 January 1864.  This Thomas mustered out on 2 June 1865 and appears to have spent time as a prisoner of war.  The town Stacyville appears attached to this record - if our Thomas, perhaps he was working there. Stacyville is well over 100 miles from Robbinston.

This pension record from 1883 lists only Thomas' mother Elizabeth.

If you have information on the family of Thomas Chester, please leave a comment or contact me directly.

Posted by Pam Beveridge at 6:26 AM