1864 Payments on Behalf of Family in Robbinston, Maine, of Civil War Soldier Benjamin C. Morrell; in 1860s/1870s Ledger of Financial Transactions of Robbinston 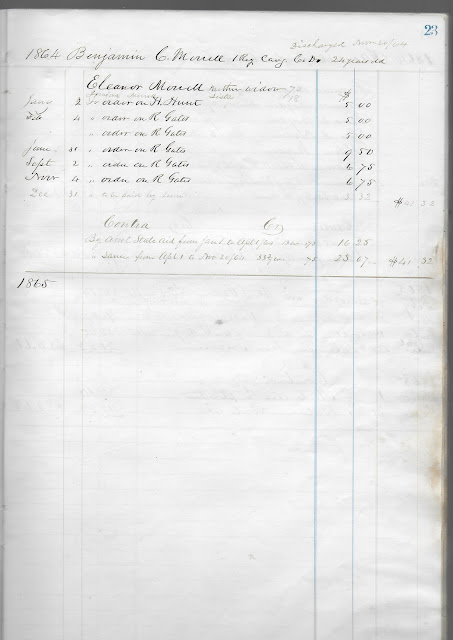 Benjamin C. Morrell, age 24; then serving in Company D of the 1st Regular Cavalry; payments made in 1864 on behalf of his widowed mother and his sister in Robbinston, Maine. "Discharged Nov 20/64."

Found on numbered page 23 in a ledger of Robbinston, Maine, financial transactions from the mid 1860s to the 1870s.


Benjamin C. Morrill was Benjamin Charles Morrell (about 1840-1911), brother of James Morrell, who also served in the Civil War and who died in service in 1865.


1870 U.S. Federal Census - Benjamin and wife Augusta, farming at Robbinston, Maine - no children in the household at time of enumeration

1911 Census of Canada - Benjamin and wife Augusta, living in Hampton, New Brunswick in the large household of Nathan Ryder.

If you have information on the family of Benjamin C. Morrell, particularly the maiden name and parents of Benjamin's wife Augusta, please leave a comment or contact me directly.

Posted by Pam Beveridge at 6:13 AM