1864/1865 Payments on Behalf of Family in Robbinston, Maine, of Civil War Soldier James E. Merry; in 1860s/1870s Ledger of Financial Transactions of Robbinston 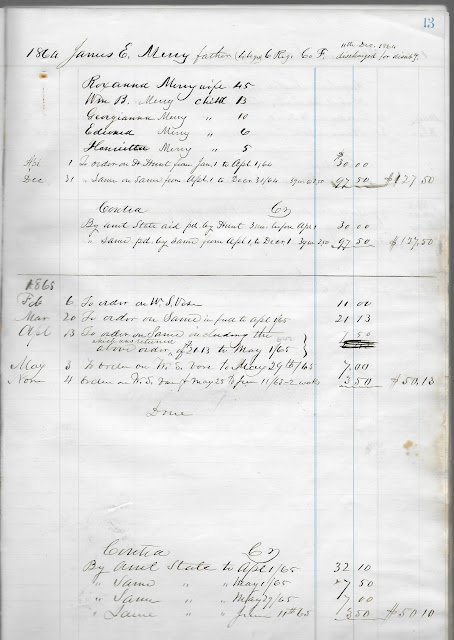 James E. Merry, age 44; serving in Company F of the Maine 6th Regiment; payments made in 1864 and 1865 to his wife and children in Robbinston, Maine.

According to the page above, Merry was discharged for disability on December 11, 1864.

Found on numbered page 13 in a ledger of Robbinston, Maine, financial transactions from the mid 1860s to the 1870s.

Note: two older sons were either not in the household by 1864 and/or were not eligible for assistance as they had attained their majority.

On 14 December 1844 at Pembroke, Maine, James E. Merry of Pembroke, Maine, and Rosanna Carlisle or Carlysle (1820-1904) of Charlotte, Maine, announced their intention to marry; they married on 1 January 1845, according to a record in The New England Historical & Genealogical Register, 1847-2011.

A record in Maine, Veterans Cemetery Records 1676-1918 reveals that James died on 27 April 1892 and was buried on 30 April 1892 in the Picnic Hill Cemetery in Robbinston, Maine - this might also be known as the Brewer Cemetery.

If you have information on the family of James E. Merry, please leave a comment or contact me directly.