1864/1865 Payments on Behalf of Parents in Robbinston, Maine, of Civil War Soldier Edwin Stanton; in 1860s/1870s Ledger of Financial Transactions of Robbinston 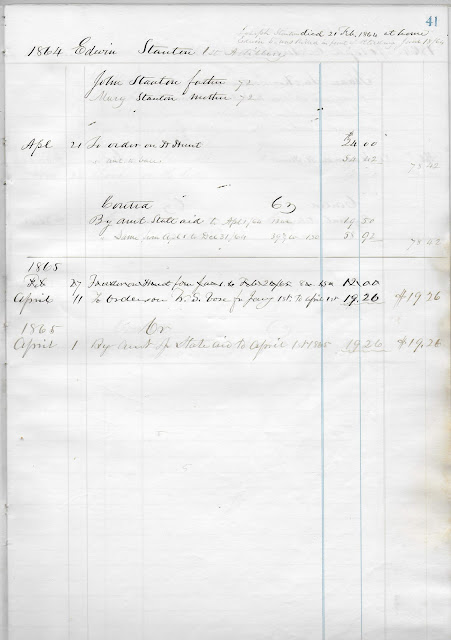 Edwin Stanton; then serving in the 1st Artillery; payments made in 1864 and 1865 on behalf of his parents in Robbinston, Maine.

The application for a veterans gravestone indicates Joseph Stanton, who had been a sailor in the U.S. Navy, died on 20 March 1865; perhaps that was the application date mistakenly put in the death field. Whether Joseph died of disease of injury incurred as a result of his service, I do not know.

Thus, in one year, 1864, a few months apart, John and Mary Stanton of Robbinston lost two sons, Joseph and Edwin.

Found on numbered page 41 in a ledger of Robbinston, Maine, financial transactions from the mid 1860s to the 1870s.

Edwin Stanton (1849-1864), born at Perry, Maine, son of John Stanton and Mary (Brooks) Stanton, who were born in New Brunswick and Ireland respectively.

1864 - Maine, Veterans Cemetery Records, 1676-1918 - Joseph Stanton is buried in Section B, Lot 156 of the Picnic Hill Cemetery at Robbinston, Maine - this cemetery may now be known as the Brewer Cemetery.

A book of Robbinston burials compiled by Sharon Howland, Melva Morrell and Frances Raye, published in 1991, notes that Joseph is buried in the new section in back of Section C of the Brewer Cemetery.

If you have information on the family of Edwin Stanton, please leave a comment or contact me directly.

Posted by Pam Beveridge at 5:41 AM