1864/1865 Payments On Behalf of Wife in Robbinston, Maine, of Civil War Soldier Samuel Leighton; in 1860s/1870s Ledger of Financial Transactions of Robbinston 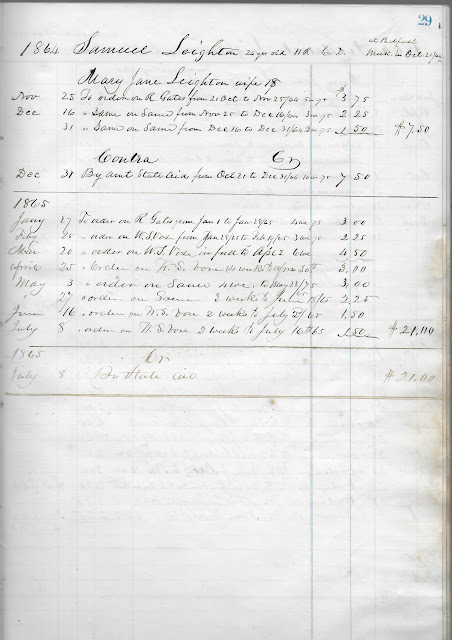 Found on numbered page 29 in a ledger of Robbinston, Maine, financial transactions from the mid 1860s to the 1870s.

Payments were made on behalf of:
FindaGrave memorial for Samuel Leighton (abt 1841-1872), son of Joel Leighton and Elizabeth (Labrae ?) Leighton - with family history information added

Maine, State Archives Collections, 1718-1957:  Samuel Leighton, first enlistment
The entry on Samuel's page indicates that he had a second enlistment, where he mustered in at Belfast, Maine, on 21 October 1864.

Samuel Leighton and Mary Jane (Butler) Leighton had several children in Robbinston, Maine.  After Samuel's death in 1872, Mary Jane married Caleb Noddin and was living in Calais, Maine at the time of the 1880 Census.  She and Caleb had a son Walter Noddin, born about 1878.

The 1891 Census of Dumbarton, New Brunswick lists Caleb and Walter but not Mary Jane or her children with Samuel Leighton.  The record of the 8 October 1895 marriage of Ida Leighton, daughter of Samuel and Mary Jane (Butler) Leighton, indicates that both of her parents were dead by then.

If you have information on the family of Samuel Leighton, please leave a comment or contact me directly.

Posted by Pam Beveridge at 7:22 AM