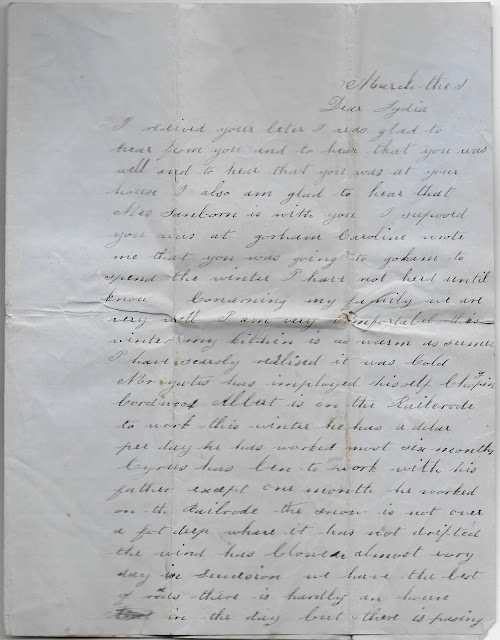 Before 1864 letter from Huldah (Lowell) Yates (1804-1889) to Lydia in Gorham, Maine. The date is based on the fact that one of the people mentioned in the letter, Huldah's stepson Cyrus Yates, died in 1864 in service in the Civil War.
A transcription appears at the end of this post.
Huldah mentions her husband in the letter. It appears she was married twice, to Curtis Yates (1790-1848) in 1826 and, after 1848, to Curtis' younger brother Elisha Yates (1799-1873), who had also been married before.  I believe the husband in the letter is second husband Elisha Yates.
At the time Huldah wrote the letter, she may have been living in Baldwin, Maine, or had moved to the Paris, Maine, area.
. 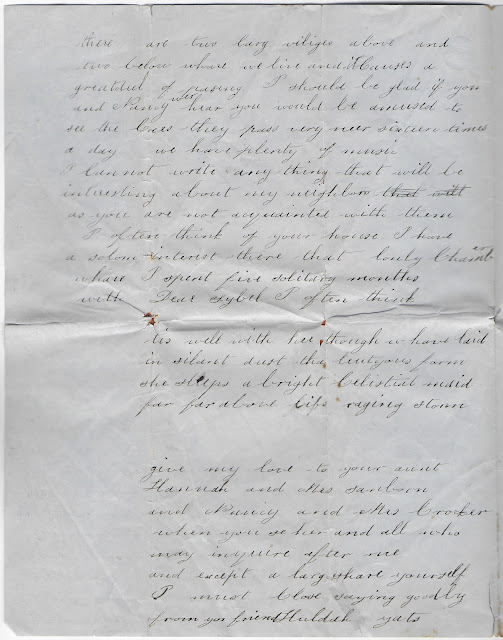 Mentioned:
If you have corrections or information to share on any of the people mentioned, please leave a comment for the benefit of other researchers.
Transcription
March the ?
Dear Lydia,
I received your letter. I was glad to hear from you and to hear that you was well and to hear that you was at your house. I also am glad to hear that Mrs. Sanborn is with you. I suposed you was at Gorham. Caroline wrote me that you was going to Gorham to spend the winter. I have not herd until now.  Concerning my family, we are very well. I am very comfortable this winter. my kitchin is as warm as summer. I have scarsly realized it was cold. Mr. Yates has imployed hisself Chopping cordwood. Albert is on the Railrode to work this winter. He has a dolar per day. He has worked most six months. Cyrus has been to work with his father except one month he worked on the Railrode. The snow is not over. A foot deep where it has not drifted. The wind has blowed almost every in succession. We have the best of ___ [roads ?] there is hardly an hour in the day but there is passing. There are two large viliges above and two below where we live and it causes a great deal of passing. I should be glad if you and Nancy was hear. You would be amused to see the cars - they pass very near sixteen times a day. We have plenty of music. I cannot write anything that will be interesting about my neighbors as you are not acquainted with them.
I often think of your house. I have a solom interest there that lovely Chamber where I spent five solitary months with Dear Sybel. I often think. tis well with her though we have laid in silent dust the ___[sentious ?] form. She sleeps a bright Celestial maid far far above lifes raging storm.
Give my love to your aunt Hannah and Mrs. Sanborn and Nancy and Mrs. Crocker when you see her and all who may inquire after me and accept a large share yourself. I must close saying goodby from your friend Huldah Yates.
Posted by Pam Beveridge at 8:05 AM