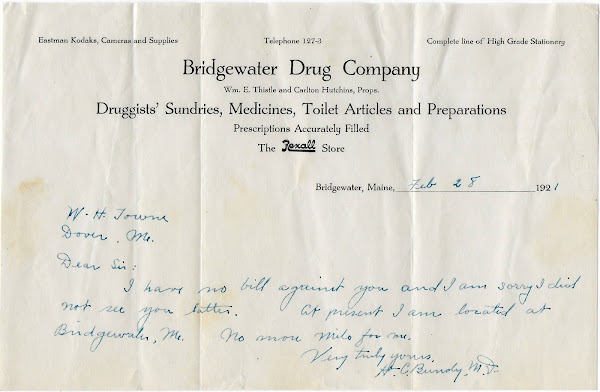 February 28, 1921 letter on Bridgewater Drug Company stationery from Dr. Harvey Clifford Bundy in Bridgewater, Maine, to W. H. Towne in Dover, Maine.
Nothing on reverse.
Note: 1921 was the year before Dover, on the south side of the Piscataquis River, merged with its neighbor Foxcroft, on the north side, to form Dover-Foxcroft.
Dr. Harvey Clifford Bundy (1890-1979) was a Vermont native who became chief surgeon and physician for the Bangor and Aroostook Railroad. He married twice:
1) In 1918: Agnes Wood Spencer (1894-1958), a native of Carroll, Maine; they had a daughter Joyce, who married Roy Wiggin.
2) In 1965: Virginia Rosamond (McLaughlin) Snare (1916-1996), a native of Hampden, Maine, who later married Aubrey W. Junkins and Rexford Donald Kent Murch. She's buried in Hampden, Maine.
Dr. Bundy and his first wife are buried in the Evergreen Cemetery in Milo, Maine, with their daughter and her husband.
W. H. Towne may have been William Harriman Towne (1880-1952), a farmer in adjacent Sebec, whose mailing address may have been Dover.
If you have corrections and information to share, or if you have a different identity for W. H. Towne, please leave a comment for the benefit of other researchers.
Posted by Pam Beveridge at 7:25 AM