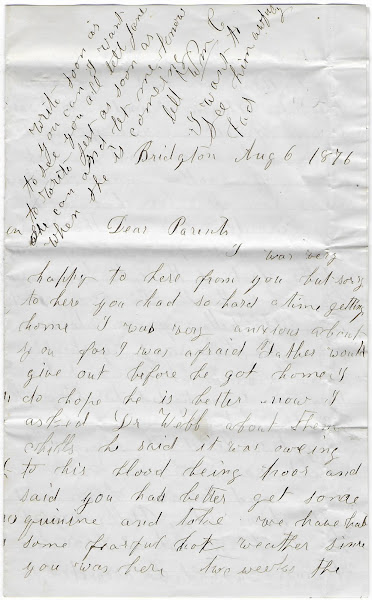 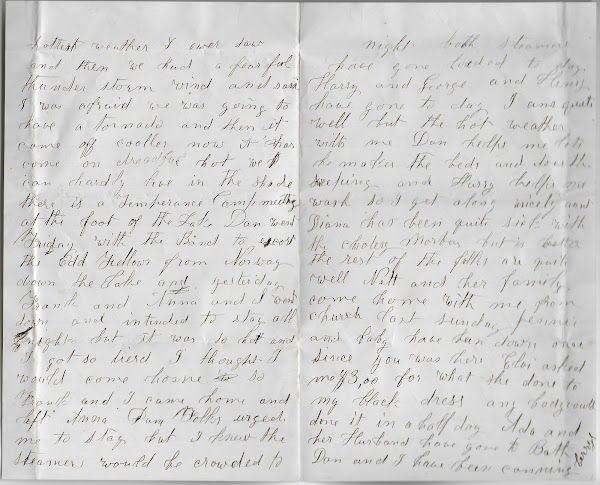 People mentioned in the letter: 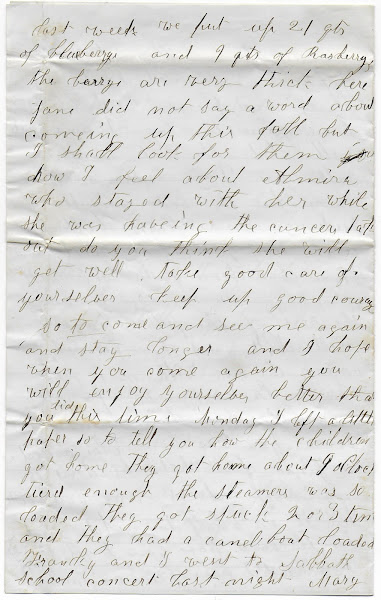 If you have corrections and/or information to share on the family of Mary Bates (Dunham) Cash and Daniel B. Cash, please leave a comment for the benefit of other researchers.
Transcription:
Bridgton Aug 6, 1876
Dear Parents
I was very happy to here from you but sorry to here you had so hard a time getting home. I was very anxious about you for I was afraid Father would give out before he got home. I do hope he is better now. I asked Dr. Webb about them Chills. He said it was owing to his blood being poor and said you had better get some quinine and [take ?]. We have had some fearful hot weather since you was here. Two weeks the
Diagonally at top:
Write soon as you can. I want to see you all. Tell Jane to write jest as soon as she can and let me know when she is coming. Tell Wm C. I want to see him awfully bad.
Hottest weather I ever saw and then we had a fearful thunder storm wind and rain, I was afraid we was going to have a tornado and then it came off cooler - now it has come on dreadful hot. We can hardly live in the shade. There is a Temperance Camp meeting at the foot of the Lake. Dan went Friday with the Band to escort the Odd Fellows from Norway down the Lake and yesterday Frank and Anna and I went down and intended to stay all night but it was so hot and I got so tired I thought I would come home. So Frank and I came home and left Anna. Dan Folks urged me to stay but I knew the steamer would be crowded tonight. Both steamers have gone loaded today. Harry and George and Henry have gone today. I am quite well but the hot weather wilts me. Dan helps me lots. He makes the beds and does the sweeping and Harry helps me wash so I get along nicely and Diana has been quite sick with the cholery Morb? but is better. The rest of the folks are quite well. Nett and her family come home with me from church last Sunday. Jennie and baby have been down once since you was here. Elvi asked me $3.00 for what she done to my black dress. Anybody could have done it in a half day. Ada and her Husband have gone to Bath. Dan and I have been canning berries. Last week we put up 21 qts of blueberrys and 7 [or 9] qts of rasberrys. The berrys are very thick here. Jane did not say a word about coming up this fall but I shall look for them. How I feel about Almira who stayed with her while she was having the cancer taken out. Do you think she will get well. Take good care of yourselves. Keep up good courage so to come and see me again and stay longer and I hope when you come again you will enjoy yourselves better than you did this time. Monday I left a little paper so to tell you how the children got home. They got home about 9 o'clock tired enough. The steamer was so loaded they got stuck 2 or 3 times and they had a canel boat loaded. Franky and I went to Sabbath school concert last night. Mary
Posted by Pam Beveridge at 9:07 AM