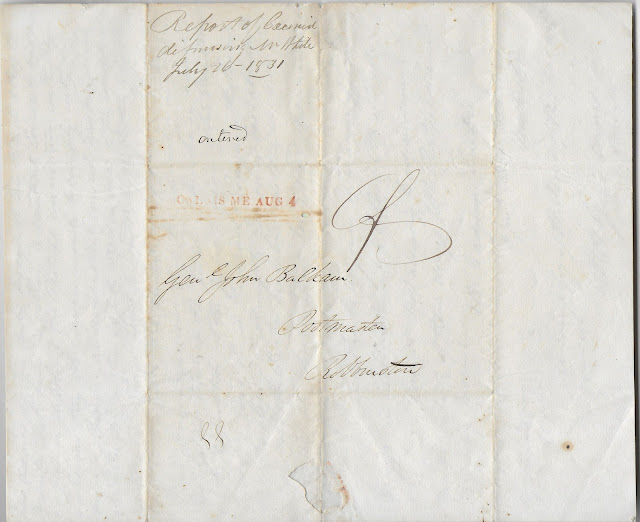 1831 report from an ecclesiastical council held at Robbinston, Maine, to determine whether or not to dismiss Rev. Calvin White from his church there. 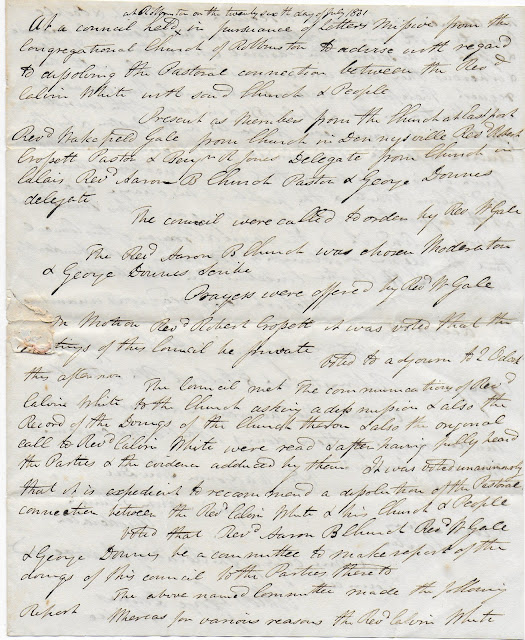 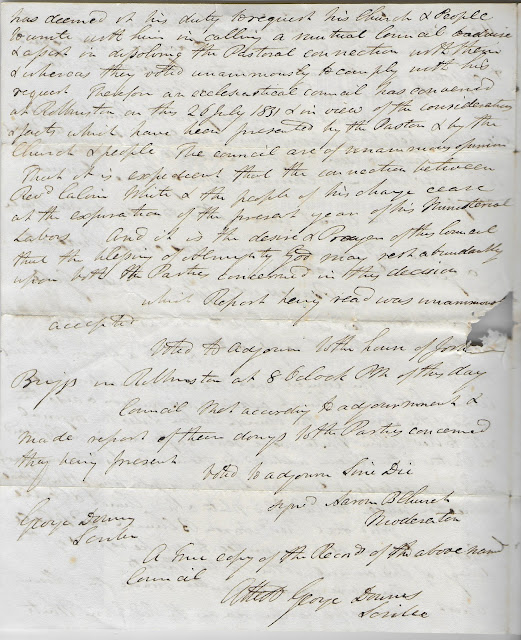 Transcription - please leave a comment if you have corrections and/or can fill in the blanks
at Robbinston on the twenty sixth day of July 1831
At a council held in pursuance of Letters ___ from the Congregational Church of Robbinston to advise with regard to dissolving the Pastoral connection between the Revd. Calvin White with said Church & People.
Present as Members from the Church at Eastport Rev. Wakefield Gale; from Church in Dennysville Rev. Robert Crossett;  Pastor & Benjamin R. Jones, Delegate; from Church in Calais, Rev. Aaron B. Church, Pastor & George Downes delegate.
The council were called to order by Rev. W Gale. The Revd. Aaron B. Church was chosen Moderator & George Downes Scribe.
Prayers were offered by Revd. Gale. On Motion Rev. Robert Crossett it was voted that the meetings of this Council be private.
Voted to adjourn to 2 o'clock this afternoon.
The Council met. The communications of Revd. Calvin White to the Church asking a____ & also the Record of the Doings of the Church thereon & also the original call to Revd. Calvin White were read & after having fully heard the Parties & the evidence adduced by them
It was voted unanimously that it is expedient to recommend a dissolution of the Pastoral connection between the Revd. Calvin White & his Church of People.
Voted that Revd. Aaron B. Church, Revd. W. Gale & George Downes be a committee to make report of the doings of this council to the Parties thereto.
The above named Committee made the following Report.
Whereas for various reasons the Revd. Calvin White has deemed it his duty to request his Church & People to unite with him in calling a mutual Council  to advise & assess in dissolving the Pastoral connection with them & whereas they voted unanimously to comply with his request. Therefore an ecclesiastical council has convened at Robbinston on the 26 July 1831 & in view of the considerations & facts which have been presented by the Pastor & by the Church of people, The Council are of unanimous opinion
That it is expedient that the connection between Revd. Calvin White & the people of his charge cease at the expiration of the present year of his Ministerial Labors. And it is the desire & Prayer of this Council that the blessing of Almighty God may rest abundantly upon both the Parties concerned in this decision.
Which Report being read was unanimously accepted.
Voted to adjourn to the house of ___ [Joseph perhaps] Briggs in Robbinston at 8 o'clock P.M. of this day.
Council Met according to adjournment & made report of their doings to the Parties concerned
They being present.
Voted to adjourn Sine Die
Signed Aaron B. Church, Moderator
George Downes, Scribe
A true copy of the Record of the above named Council
Attest George Downes, Scribe
If you have information to share on any of the men mentioned here, please leave a comment for the benefit of other researchers.