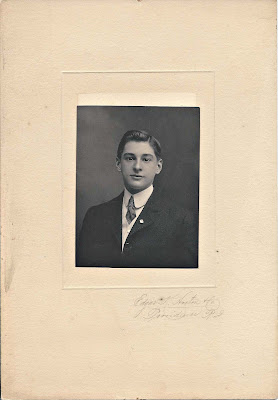 The graduate is identified on the reverse as, if I'm reading the identification correctly, Sarah C. Wynne, presumably Sarah Curtis Wynne.

However, the person in the photograph is a male, so I'm guessing that two photographs were stuck together when Sarah wrote her name on what she thought was the reverse of her own photograph.

This photograph was found with 15 others of graduates of Technical High School at Providence, Rhode Island.  See a list of the other graduates at the end of this post.

If you recognize this young man from your family photographs or research, please leave a comment with his identity. 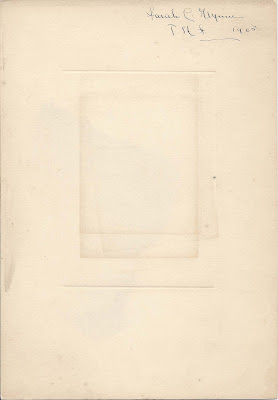 Sarah Curtis Wynne was born October 22, 1887 at Lawrence, Massachusetts, the daughter of Isaac Wynne and Annie Hazard (Curtis) Wynne.  By 1900 the family was living at Providence, Rhode Island.  By 1910, Sarah was boarding at Burbank, California, and working as a stenographer at a wholesale grocery.

On March 9, 1921 at Burbank, California, Sarah C. Wynne married Henry W. Reynolds, son of A. B. Reynolds and Anna (Markley) Reynolds.   Sarah and Henry had at least one child, a daughter.  Henry had died by the time of the 1940 Census.  Sarah died in 1957 at Los Angeles.