1885 Letter Mailed from Ambrose Sewell Thomas at Searsmont, Maine, to his Brother Lucian H. Thomas, then at Etta, California, in Sierra County.

Letter postmarked June 25, 1885 at Searsmont, Maine, from Ambrose Sewell Thomas of Searsmont to his brother Lucian H. Thomas, then at Etta, California, in Sierra County, where he had presumably gone in search of his fortune, though he returned to Searsmont, married and raised a family.

Etta, a village now known as Randolph, is located in Sierraville, California.  From the 1893 edition of the California State Gazetteer and Business Directory: 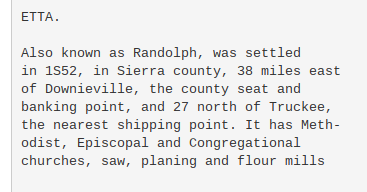 The envelope measures a hair over 5" by 2-3/4" and contains one sheet measuring approximately 8" by nearly 5".

Ambrose is writing in response to a letter from Lucian asking for money he's owed.  Ambrose says that he's late in responding as his sons Rodney and Albert have been sick.  Ambrose also mentions that he will write to brother Elbridge to see if he has money to spare and that "Wes" was not able to spare any.  "It is hard times here", Ambrose says.

A loose transcription appears at the end of this post.

Ambrose Sewell Thomas was born about November 1838, the son of Timothy H. Thomas and Thankful E. (Calderwood) Thomas.  Ambrose married Rebecca (Heal) Ward, widow of Joseph Ward, Jr., about 1865.  Ambrose and Rebecca had, I believe, five children, three of whom died young or fairly young.  Ambrose died in 1932; his wife had predeceased him in 1917.  Ambrose, Rebecca and at least three of their children are buried in the Thomas Cemetery in Waldo County, Maine.

Lucian H. Thomas was born about August 1859, son of Timothy H. Thomas and Thankful E. (Calderwood) Thomas.  On September 10, 1887 at Searsmont, Maine, a little more than two years after this letter was written, Lucian married Margaret A. Bryant, "Maggie"; whether Bryant was Maggie's maiden name or she was previously married, I don't know.

Lucian and Maggie had at least two children, sons Jessie Owen Thomas, born in 1888 and Albert L. Thomas, born about 1889.  I don't have death dates for Lucian or Maggie.  Hopefully a reader will provide more information.

Searsmont, June the 20, 1885
Dear brother.  I received your letter but have had no time to answer it.  Rodney has been sick and Albert with a fever.  I tried to get some money but have not found any yet.  I am going to write to Elbridge and see if I can get it of him.  I saw Wes and told him you wanted your money.  He said if he could find it anywhere, he would get it.  It is hard times here.  There is nothing doing here.  It is cold and backward.  The folks is about done planting.  Please write and tell us how you are getting along and what you think of it out there.  I don't [know] as I can write any more this time.
From brother
A. S. Thomas.

Well, Sucker - how is you?  I have been sick two months and can just get around.  Will write soon, going now.
Dick