Quit-Claim deed where John Prescott and Prescott Moulton Pirington of Calais, Maine, purchased from Calais Savings Bank the buildings and land formerly known as the Benjamin F. Waite homestead.  The deed is dated October 26, 1881 and was signed by George A. Lowell, Treasurer of Calais Savings Bank.

See other posts that features three other deeds connected with John Prescott and Prescott Moulton Pirington:
Benjamin Franklin Waite died February 23, 1875, while the referenced property was still mortgaged with Calais Savings Bank.  According to the deed description, the bank foreclosed on the property on August 9, 1875.  The property is described as being on the easterly side of Main Street in Calais.

Incidentally, another post features a Bible that was presented in 1849 to young George Albert Lowell at Milltown, Maine, by his mother, Sarah (Smith) Lowell. 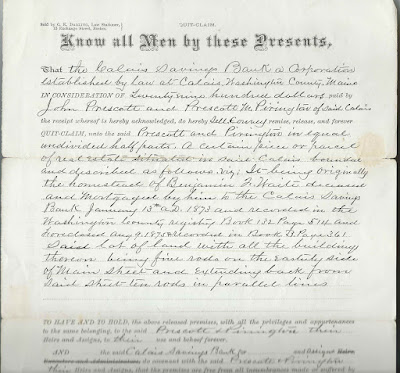 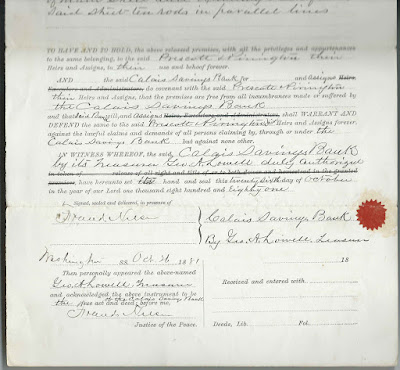