Note: I've included links to burial information on some of the people below, but I haven't verified the sources used, so take the information with a grain of salt.  Please advise me of any errors and/or additions.

This iwas found with three other documents relating to Calais, Maine:


July 19, 1882 deed where Samuel G. Pike, executor of the estate of Joseph Granger, a recently deceased Calais lawyer, sold a home, formerly known as the Dyer House and lot, at Milltown, Maine, to Prescott M. Pirington and John Prescott of Calais, Maine.  The house was located adjacent to the property of the proprietors of the First Baptist Meeting House, on the north side; Main street, on the east side; and James Murchie & Sons land to the north and west.

The deed was signed by Samuel G. Pike in the presence of E. B. Harvey, Justice of the Peace.  Pike was given  authority to sell the property by Judge of Probate James A. Milliken.  E. B. Harvey was Enoch Blanchard Harvey (1823-1896), a native of Vermont who moved to Calais, Maine, and practiced law there.

The excerpt below on Joseph Granger is from the Annals of Calais, Maine and St. Stephen, New Brunswick: Including the Village of Milltown, Me. and the Present Town of Milltown, N.B., published by I. C. Knowlton in 1875.


The deed - click on any image to enlarge it: 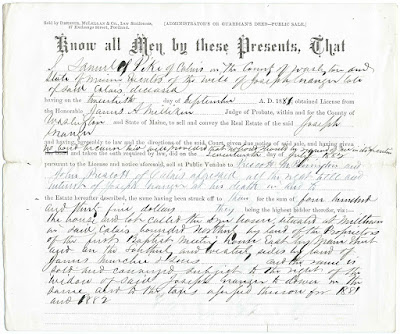 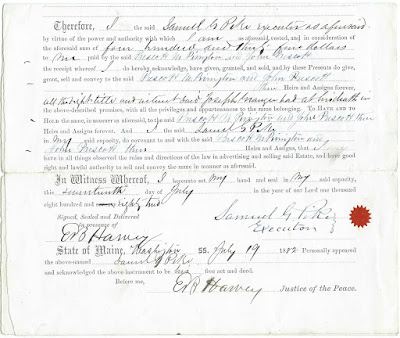 f If you have information to share on Samuel G. Pike; James A. Milliken; Prescott Moulton Pirington; John Prescott or Enoch Blanchard Harvey, please leave a comment or contact me directly.

Incidentally, I noticed an 1836 letter on eBay in 2013 from Joseph Granger to attorney Moses Emery at Saco, Maine - the excerpt above notes that Granger had studied law with Emery in the period just before 1830.  The letter reveals Granger's hope to have a railway extension from Baring, Maine, to Bog Brook at Calais, Maine, which would save him 3-1/2 miles off his current route. 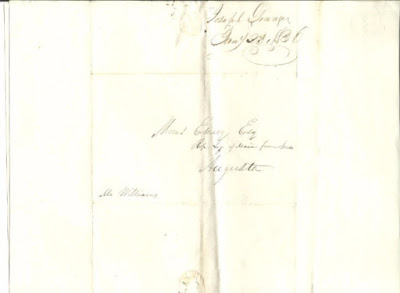 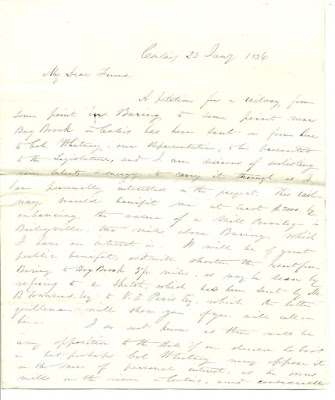 Bog Brook was in the vicinity of Hardscrabble Road in Calais.

Posted by Pam Beveridge at 3:21 PM