1809 Brunswick, Maine [then part of Massachusetts] Promissory Note where William Hunt promises to pay Jotham Stone $41.70 with Interest.  The document was witnessed by William Hall.

The excerpts shown in screenshots below are from the History of Brunswick, Topsham and Harpswell: including the Ancient Territory Known as Pejepscot, written by George Augustus Wheeler and published in 1878.

Jotham Stone may have been the Jotham Stone who was born at Bath, Maine, in 1778 and died at Brunswick, Maine, in 1823, where he is buried in the Pine Grove Cemetery with wives Bridget (Walker) Stone and Nancy (Whitwell) Stone.  Jotham's son with Bridget (Walker) Stone, Timothy W. Stone, is buried with them.  It appears that his mother may have died at his birth.  Jotham was a merchant at Brunswick, Maine.  He is the last person mentioned in the excerpt below. 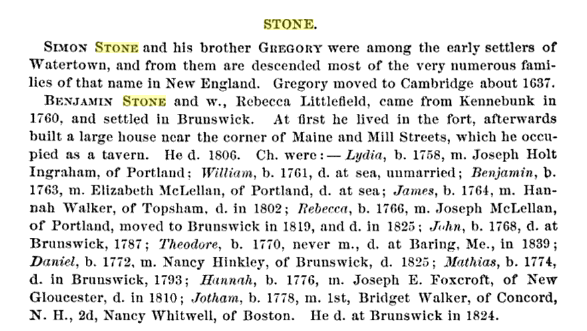 William Hunt may have been the Harpswell, Maine, privateer who sailed the Sea Flower, or perhaps the Brunswick, Maine blacksmith or another William.  An excerpt about the Hunt family from the History of Brunswick, Topsham and Harpswell: including the Ancient Territory Known as Pejepscot: 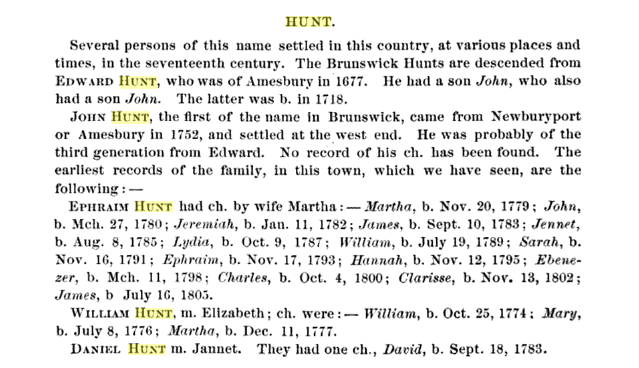 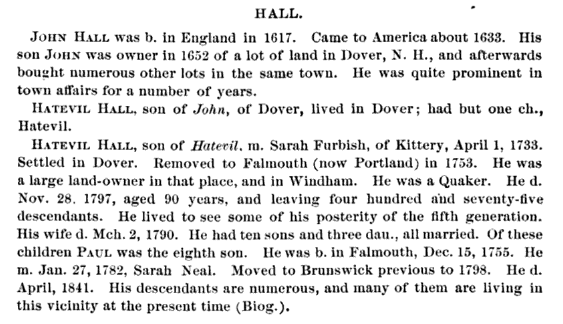 If you have have more information on Jotham Stone, William Hunt or William Hall, please leave a comment or contact me directly.

Posted by Pam Beveridge at 1:37 PM