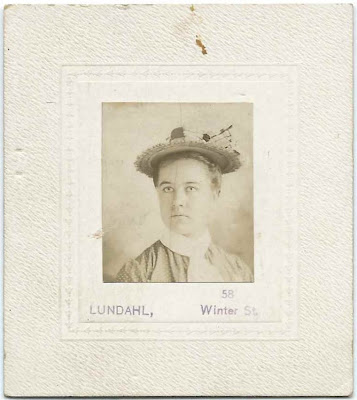 1901 photograph of a teenage girl identified on the reverse as Maude Ballou of 56 Fairview Street, Winthrop, Massachusetts.

The photograph was taken at the Lundahl studio at 58 Winter Street, Boston, Massachusetts.  The identification does not give Maude's exact street address in Winthrop, but several of her school records do. 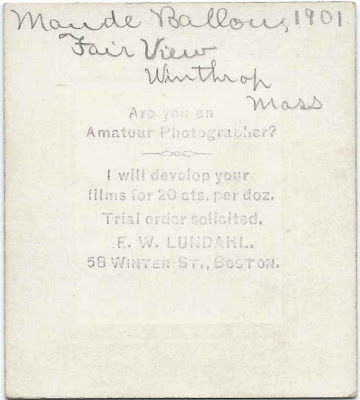 Martha Parsons (Gerring) Ballou was the daughter of George Gerring and Abbie Amanda (Crouse) Gerring Steward, whose photograph is featured in another post.

Maude attended the State Normal School at Bridgewater, Massachusetts in 1907 and 1908.  She sang First Alto with the Glee Club.  By 1909 she was teaching or student teaching at the Fairlawn School at Lincoln, Rhode Island.

Apparently Maude stayed in Rhode Island, as she appears on the 1925 Rhode Island Census and the 1930 and 1940 Federal Censuses as a resident of Providence.  I didn't find a marriage record for her or a death record until her maiden name.

Maude was involved in animal welfare in Rhode Island.  At the very beginning of her teaching career, she served with the "Helpers of the Helpless" at Fairlawn School, as noted in Animals, Volumes 41-42, published by the Massachusetts Society for the Prevention of Cruelty to Animals, published in 1908.