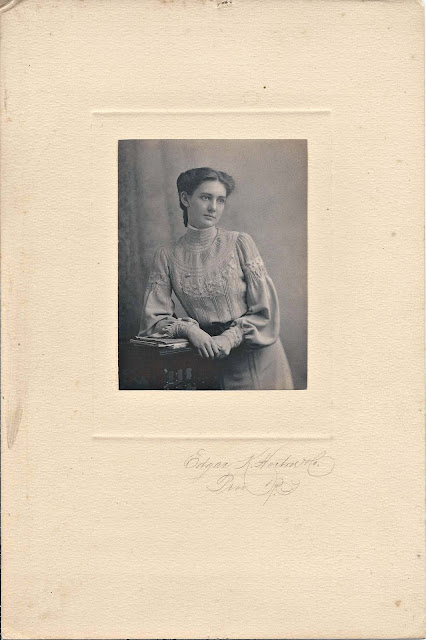 1905 graduation photograph of Ella Grace Hartman, a student at Technical High School at Providence, Rhode Island.  Ella would enroll at Brown University in 1909. 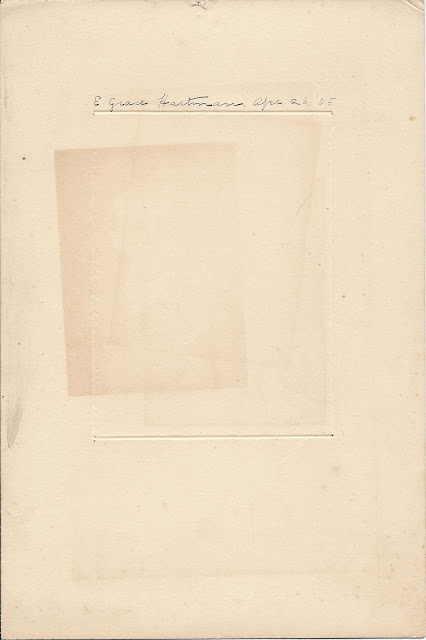 The photograph is 4" by 3"; mounted, the it measures 10" by 7".  It was found with 15 other photographs of graduates of the Class of 1905 at Technical High School.  Most of the photographs, like this one, were taken at the studio of Edgar K. Horton at Providence, Rhode Island.

A list of the 16 graduates in the collection of photographs appears at the end of this post.

Ella was teaching at the time of enumeration of the 1910 Census of Providence, Rhode Island.  I believe she is the Ella Grace Hartman who married James Kendall Brigham on October 14, 1916.  James was born April 4, 1889 at Fall River, Massachusetts, the son of James W. Brigham and Mary Elizabeth (Kendall) Brigham.  According to Census information, they were living at Boston, Massachusetts, in 1920; and Montclair, New Jersey, in 1930.  According to the  1940 Census of Providence, Rhode Island, Ella Grace was divorced and working as an executive housekeeper at a hotel.

Posted by Pam Beveridge at 7:11 AM