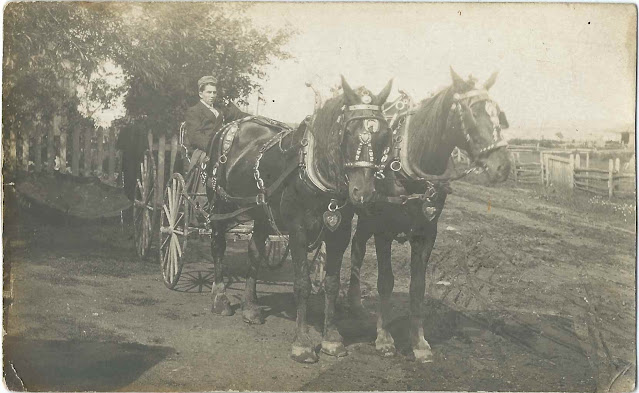 Note of October 19, 2016:  Be sure to scroll down to the comments section where a reader has researched the printer of the postcard and is fairly sure the card was produced in Canada.  In addition, he identified several possibilities for Jean Baptiste Leclerc.

Real photo postcard of a man who identified himself on the reverse as Jean Baptiste Leclerc.   The postcard was found with a collection of photographs, most of them, but not all, of Maine people and scenes.

His message is written in French, which might point to Quebec or the Maritime provinces, but French was - and is - spoken in several states in the U.S. as well, including Maine.

He's wearing a cap that looks to be part of a uniform and is driving a pair of horses in a fancy harness, festooned with hearts.  Perhaps his occupation was driving for hire; or perhaps this was the harness he used for special occasions.

Sadly, there's no clue to the locale.

The photograph was purchased with a group of photographs, most of which, though not all, were from Maine.  And there just so happened to be a Jean Baptiste Leclerc born at Brunswick, Maine, on August 1, 1887, son of Guillaume Leclerc and Lena Demere Leclerc.

But I'm not sure U.S. postcards used the phrase "For Inland Postage", so the card might have been produced in Canada. 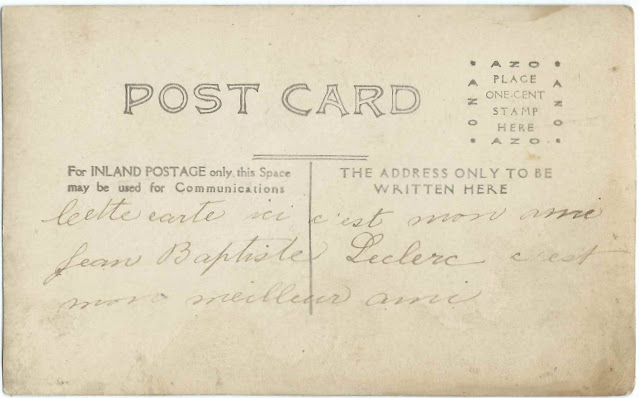 If you have a relative named Jean Baptiste Leclerc who took great pride in his team of horses, please check your family albums for a resemblance to the fellow shown on the postcard.