1893 Assignment of Mortgage from William A. Murchie to John Prescott - Calais, Maine

Assignment of mortgage signed July 15, 1893 by William A. Murchie to John Prescott, in a mortgage originally given to Murchie by Arabella Hicks and Ira Hicks of Calais, Maine.

This document was found with three other documents relating to Calais, Maine: 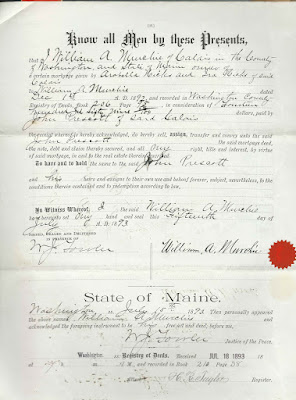 William Andrew Murchie was born March 25, 1841 at Oak Bay, New Brunswick, not far from Calais, Maine.  He was the son of James Simpson Murchie and Mary Ann (Grimmer) Murchie.  William married twice: 1)  Ella Todd, with whom he had four children; 2)  Mina DeHart Rounds, with whom he had two children.

John and his wives and other family members are buried in the Calais Cemetery at Calais, Maine.

Ira Hicks, a sawmill operator, and wife Arabella (Estabrooks) Hicks were New Brunswick natives who lived at Baring, Maine, and Calais, Maine.   Arabella died at Calais, Maine, on September 26, 1909.  Her death record indicates that Ira had predeceased her.

Posted by Pam Beveridge at 7:00 AM