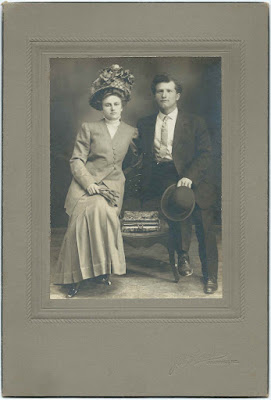 c1910 photograph of a couple, implied a wedding couple on the reverse. The photograph was taken by the J. M. Bouchard studio of Van Buren, Maine.

Three names are mentioned in the handwriting on the reverse:
Based on the clues of names and locale, I believe this is a wedding photograph on the occasion of the April 6, 1910 marriage of Mary Grace, or Marie Grace, of Eagle Lake, Maine, and Laurent Violette of Van Buren, Maine.  The marriage took place at Eagle Lake, Maine.  At the time of their marriage, Marie was working as a seamstress, and Laurent as a laborer. 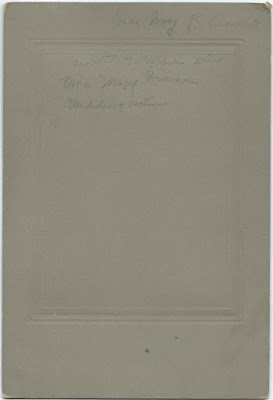 Mary or Marie Grace was born about 1885 at Cyr Plantation, Maine, the daughter of Michael Grace and Ozithe (Soucy) Grace.  I found a few instances of people with the surname Dick-Grace and a case of where Marie's surname was listed as Dick, but no real sources.  Hopefully a reader will have more information.

Laurent Violette was born about May, 1887 at Van Buren, Maine, the son of Abel Louis Violette and Marguerite (Cyr) Violette.  I wonder if he was the Laurent Theodore Violette who was living at Van Buren, Maine, when he completed his World War I draft registration card and noted that he had a wife and 4 children to support.

I wonder if Mary P. Ouellett was the Mary born about March 1885, daughter of Joseph and Sophia (Picard) Ouellett of Cyr Plantation, as noted in the 1900 Census of Connor and Cyr Plantations and Van Buren.

Posted by Pam Beveridge at 8:26 AM