CDV of Woman IDed as Sarah E. Palmer; by a studio at Dover, Maine 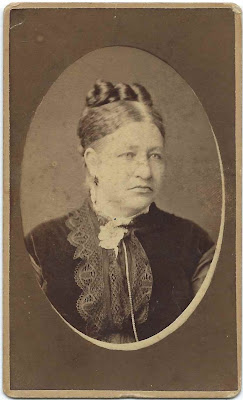 Carte de Visite of a woman identified on the reverse as Sarah E. Palmer.  The CDV was made at the D. C. Dinsmore studio of Dover, Maine, now part of Dover-Foxcroft, Maine. 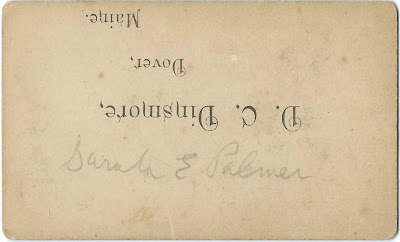 This CDV was found with another of E. B. Palmer, which was taken at the H. W. Emery studio of Kendall's Mills, Fairfield,  Maine and is featured in another post.  E. B. Palmer was presumably Esther L. (Bemis) Palmer, "Etta", wife of Sarah's brother Ira F. Palmer.  The three of them are buried in the same plot at the Dover Cemetery at South Dover-Foxcroft, Maine, according to a record in the Faylene Hutton Cemetery Collection.

Sarah Elizabeth Palmer was born April 8, 1832 at Sebec, Maine, daughter of Samuel Palmer and Susan Twombly (Wingate) Palmer.  Samuel and Susan had married at Sebec, Maine, on September 12, 1823; they had several children other than Sarah.

It appears that Sarah never married.  She died of dropsy at Dover, Maine, on January 19, 1894 and is buried in the Dover Cemetery at Dover-Foxcroft, Maine, with family members.

Posted by Pam Beveridge at 9:42 AM