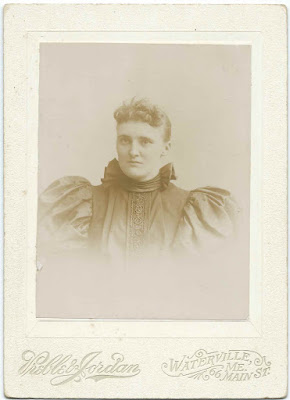 Cabinet photograph, possibly from the 1880s-1890s era, of a young woman identified on the reverse as Eva Morrill.  The photograph was taken by the studio of Preble & Jordan of Waterville, Maine.

Waterville, Maine, was - and is - a service area for central Maine, so Eva could have been a resident from a wide range of towns. 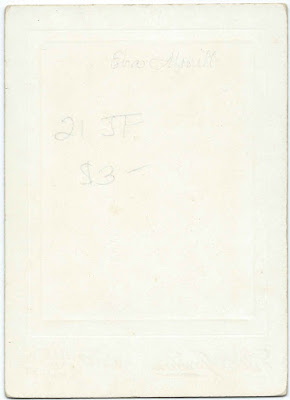 She may have been the Evalina Abbie Morrill, "Eva", born October 29, 1852, daughter of Alvin and Alvira (Whittier) Morrill of Chesterfield, Maine.  According to the 1870 Census of Chesterville, that Eva was already teaching school at the age of 17.  She died in 1875 and is buried with her parents in the Chesterville Hill Cemetery at Chesterville, Maine.  I'm not convinced that the photograph was taken as early as 1875, however, though it's possible.

An Eva Angie Morrill was born September 24, 1870 at Vienna, Maine, daughter of William H. Morrill and Angeline (Graves) Morrill.  Could this photograph have been taken in the 1890s?  Could it have been this Eva who married William H. McLane at Bangor, Maine, on February 8, 1893?

There were other women born Eva Morrill in Maine during the latter part of the 19th century.

Or perhaps Morrill was Eva's married name, which opens up many more possibilities.  If you recognize this woman from your family photographs or research, please leave a comment or contact me directly.