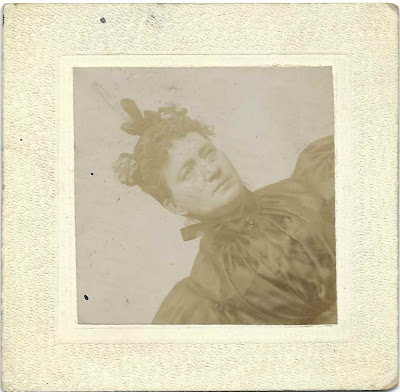 Small photograph dated March 1896 of a woman identified on the reverse as Abbie Amanda (Crouse) Gerring Steward.  The photograph was taken at the Imperial Photo Studio at 22 Tremont Street, Boston, Massachusetts. 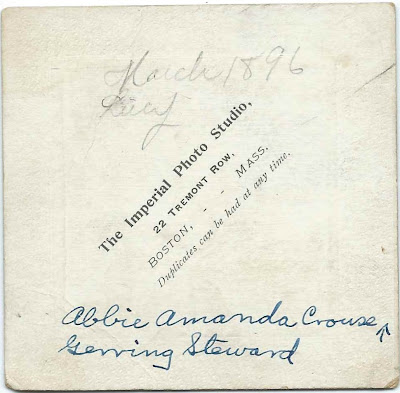 On April 2, 1862 at Boxford, Massachusetts, Abbie married fisherman George Gerring III, son of George Gerring and Elizabeth H. (Marston) Gerring.  Abbie and George III had, I think, two children, one of whom was Martha Parsons Gerring, who married John Sanford Ballou - the 1901 photograph of their daughter Maude Gerring Ballou is featured in another post.

I'm not sure if George III died - fishing was and is a dangerous profession - or they divorced, but Abbie married Joseph McLellan Steward at Boston, Massachusetts, on December 25, 1867.  Joseph was born August 11, 1842 at Boston, Massachusetts, the son of Charles Steward and Lucy (Albee) Steward, who were born in Nova Scotia and at Edgecomb, Maine, respectively.  Joseph was also involved in the fishing industry, but ashore.