1849 Engraving and Article: the Scythe Factory of Reuben Barnes Dunn at Dunnsville, North Wayne, Maine - from The Ladies' Repository 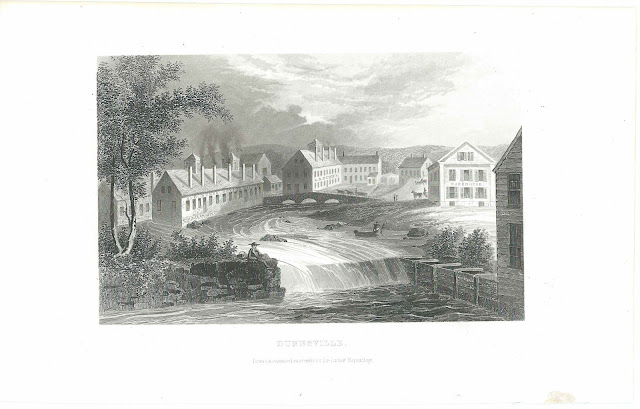 Engraving of the scythe mill owned by Reuben Barnes Dunn (1802-1889) at Dunnsville in North Wayne, Maine.

The engraving was "drawn and engraved expressly for the Ladies' Repository", for the April 1849 issue. See an image of the article page and a transcription farther below.

Dunn had purchased a small scythe factory at the site in 1840 and greatly expanded it over time. Later he would extend his interests into Oakland, Maine, and Waterville, Maine. Interestingly, the North Wayne Tool Company, previously named the Dunn Edge Tool Company, was still producing agricultural tools at Oakland, Maine, as late as 1967, when it closed its doors.

Dunn had many occupations and interests over the course of his life: teacher; country store owner; lumber dealer; manufacturer of agricultural implements; railroad developer; owner of cotton and woolen mills; state legislator; benefactor of the Methodist church, including Maine Wesleyan Seminary at Kents Hill and a term of 1877 to 1889 as a trustee at Wesleyan University at Middletown, Connecticut.

Reuben Barnes Dunn (1802-1889) was born at Poland, Maine, the son of Josiah Dunn and Sarah (Barnes) Dunn. Reuben's first two wives, who were sisters, died not long into their marriages; his third wife survived him. All three marriages produced at least one child.
Reuben's first two wives are buried in the Empire Cemetery at Poland, Maine; he and his third wife Lydia are buried in the Pine Grove Cemetery in Waterville, Maine.

The Maine Historical Society has a printed wood-cut portrait of Reuben Barnes Dunn and a broadside, written about the Dunn Scythe, to be sung to the tune of Old Dan Tucker.

Information about Dunn and his family appears in The Centennial History of Waterville, Kennebec County, Maine, Including the Oration, the Historical Address and the Poem Presented at the Celebration of the Centennial Anniversary of the Incorporation of the Town, June 23d, 1902, compiled by Edwin Carey Whittemore of the Centennial Committee, and published in 1902. 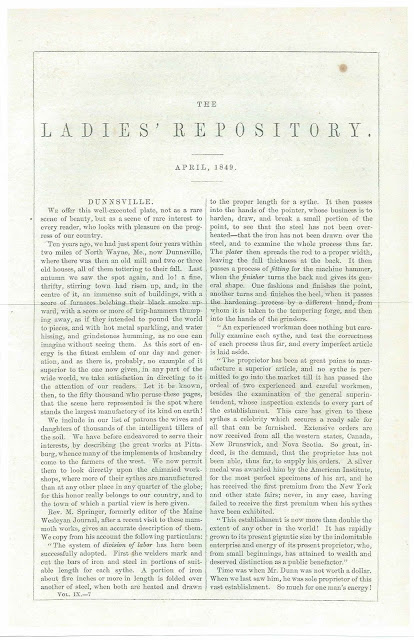 We offer this well-executed plate, not as a rare scene of beauty, but as a scene of rare interest to every reader, who looks with pleasure on the progress of our country.

Ten years ago, we had just spent four years within two miles of North Wayne, Me., now Dunnsville, where there was then an old mill and two or three old houses, all of them tottering to their fall. Last autumn we saw the spot again, and lo! a fine, thrifty, stirring town had risen up, and, in the the centre of it, an immense suit of buildings, with a score of furnaces belching their black smoke upward, with a score or more of trip-hammers thumping away, as if they intended to pound the world to pieces, and with hot metal sparkling, and water hissing, and grindstones humming, as no one can imagine without seeing them. As this sort of energy is the fittest emblem of our day and generation, and as there is, probably, no example of it superior to the one now given, in any part of the wide world, we take satisfaction in directing to it the attention of our readers. Let it be known then, to the fifty thousand who peruse these pages, that the scene here represented is the spot where stands the largest manufactory of its kind on earth!


We include in our list of patrons the wives and daughters of thousands of the intelligent tillers of the soil. We have before endeavored to serve their interests, by describing the great works at Pittsburg, whence many of the implements of husbandry come to the farmers of the west. We now permit them to look directly upon the chimnied workshops, where more of their sythes are manufactured than at any other place in any quarter of the globe; for this honor really belongs to our country, and to the town of which a partial view is here given.


Rev. M. Springer, formerly editor of the Maine Wesleyan Journal, after a recent visit to these mammoth works, gives an accurate description of them. We copy from his account the following particulars: "The system of division of labor has here been successfully adopted. First the welders mark and cut the bars of iron and steel in portions of suitable length for each sythe. A portion of iron about five inches or more in length is folded over another of steel, when both are heated and drawn to the proper length for a sythe. It then passes into the hands of the pointer, whose business is to harden, draw, and break a small portion of the point, to see that the steel has not been overheated - that the iron has not been drawn over the steel, and to examine the whole process thus far. The plater then spreads the rod to a proper width, leaving the full thickness at the back. It then passes a process of fitting for the machine hammer, when the finisher turns the back and gives its general shape. One fashions and finishes the point, another turns and finishes the heel, when it passes the hardening process by a different hand, from whom it is taken to the tempering forger, and then into the hands of the grinders.

"An experienced workman does nothing but carefully examine each sythe, and test the correctness of each process thus far, and every imperfect article is laid aside.

"The proprietor has been at great pains to manufacture a superior article, and no sythe is permitted to go into the market till it has passed the ordeal of two experienced and careful workmen, besides the examination of the general superintendent, whose inspection extends to every part of the establishment. This care has given to these sythes a celebrity which secures a ready sale for all that can be furnished. Extensive orders are now received from all western states, Canada, New Brunswick and Nova Scotia. So great, indeed, is the demand, that the proprietor has not been able, thus far, to supply his orders. A silver medal was awarded him by the American Institute, for the most perfect specimens of his art, and he has received the first premium from the New York and other state fairs; never, in any case, having failed to received the first premium when his sythes have been exhibited.

"The establishment is now more than double the extent of any other in the world! It has rapidly grown to its present gigantic size by the indomitable enterprise and energy of its present proprietor, who, from small beginnings, has attained to wealth and deserved distinction as a public benefactor."

Time was when Mr. Dun was not worth a dollar. When we last saw him, he was sole proprietor of this vast establishment. So much for one man's energy!