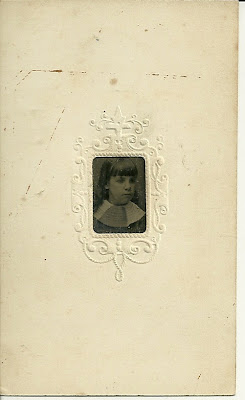 Tintype of a young girl identified on reverse as Rachel D. Dresser.  The first name is a bit hard to decipher, but I believe it to be Rachel or Rachael.  The photograph was found with a collection of photographs from Bangor, Maine. 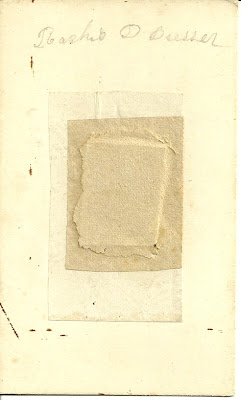 Rachel or Rachael D. Dresser was born about 1848 in Maine, the daughter of Samuel P. and Elsie or Elcy Charteris (Ward) Dresser, who were living in Bangor, Maine, in the 1850 Census.

Elsie or Elcy Charteris (Ward) Dresser was far more difficult to research.  For one thing, many references online do not recognize that Samuel Dresser was married twice and give Rachel's mother as Caroline (Proctor) Dresser, his first wife.  Secondly, the Censuses reflect differing birth years and places of birth for Elsie: from 1816 to 1823 in either Maine or New Brunswick, Canada.

Update: I've been contacted by a reader with additional information on Caroline.  She married James C. Sellers, relocated to California and raised a family.  She died in 1920.  Her obituary gave her middle initial as W.  The obituary noted that she had a grandson living in Brewer, Maine, by the name of Carleton A. Parker.

Update:  Since determining that the middle name of her mother Elcy was Charteris or Charters, I'm more inclined to believe that Caroline was named after her father Samuel's first wife, Caroline Proctor.

Rachel had a half brother from her father's marriage to Caroline (Proctor) Dresser: Samuel Dresser; I'm not sure of his middle initial, as I found variations.  He was born about 1830 in Lowell, Massachusetts, and died there on 6 March 1890.

In the 1860 Census, Rachel Dresser was living in the household of her mother Elsie, along with Elsie's 4 year old son Walter S. Bolton, James and Cary Sellers, and Rachel's paternal grandmother Eunice Dresser.

By the 1870 Census, Dearborn, Elsie and Walter Chase were living in Bangor.  I believe the enumerator made a mistake in listing Walter's name as ditto for Chase, as he appears in Census and other information as Walter S. Bolton afterward.  He married Louisa M. Baker in 1879 and had five children.  After Louisa's death, he married Harriet O. Rolfe.  He died in 1910.

Rachel D. Dresser was out of the house by the time of the 1870 Census, as she had married Meldon Nealley on 3 May 1868 in Bangor, Maine and was living in Brewer, Maine, just across the Penobscot River from Bangor.  She was still in Brewer with her husband Meldon in the 1880 Census.  I've found at least two children for them: Charles Nealley, born about 1871, and Caroline "Carrie" Gertrude Nealley, born about Mar 1880.  I believe Carrie married Maurice H. Powell of Orono, Maine, in 1902.

Rachel died in Cambridge, Massachusetts, on 25 March 1886.  After her death, Meldon married Anne S., about whom I have no information.  I found Meldon and Anne in the 1900 through to the 1930 Censuses of Brewer, Maine.

In the 1880 Census, Elsie [or Elcy] and Dearborn Chase were still living in Bangor, but Walter was out of the house by then, married in 1879 to Louisa M. Baker.  In the 1900 Census, Elsie was living with Walter's daughter Mabel (Bolton) Emery and her husband Clarence Percy Emery in Stowe, Vermont.  As mentioned above, Elsie died in 1902 in Fall River, Massachusetts.