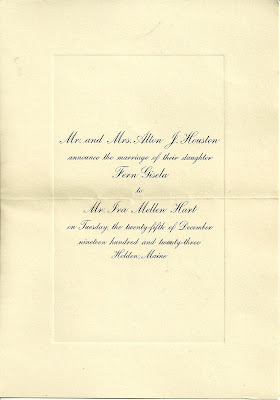 Alton J. Houston was born 1 December 1881 in Bucksport, Maine, the son of John M. and Lenora Houston.
In 1904 he married Ida L. Cowing of Dedham, Maine.  She was born 26 January 1884 in Maine, the daughter of John Frost Cowing and his wife Lucy Ann (Saunders) Cowing.   They had three daughters in all.

Posted by Pam Beveridge at 3:00 PM