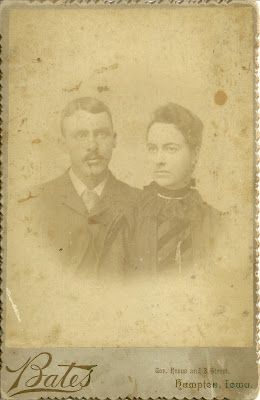 Cabinet photograph made by the Bates studio of Hampton, Iowa, of brother and sister Catherine "Kate" (Glanville) Fanselow and Oliver E. Glanville. 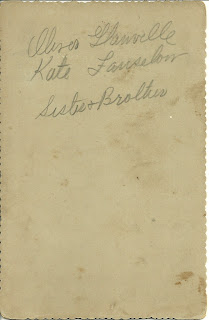 There seemed to be a large number of Glanvilles from Cornwall, England, in the US, perhaps because there was work for miners here.  Some of the information I found online had Glanville folks mixed up.  I hope I didn't fall into that trap, but I could have.

In 1891 Catherine "Kate" Glanville married Henry C. Fanselow [also seen as VanSelow and Fanslow], who was born in May 1864 in Germany.  On the 1900 Census he indicated he had emigrated to the United States in 1866; in another place I saw 1873.  His parents were Henry Fanselow and, possibly, Louisa (Schmidt) Fanselow.  Kate and Henry lived in Oakland and Perry, Iowa, and raised a family of at least four children.

In 1897, Oliver E. Glanville married Bessie L. Cale, who was born in September 1876 in Iowa, the daughter of Andrew and Amelia (Camp) Cale, who were both born in Pennsylvania.  Oliver and Bessie lived in Hamilton, Iowa and raised two children.  Bessie married Louis Van Every after Oliver died in 1905 and had another child.

If you have corrections, additions or insights regarding the information presented above, please leave a comment in the comments box or contact me directly.