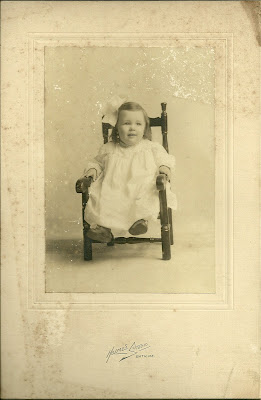 1911 photograph of Mildred Pratt of Bath, Maine, taken by Holmes Studio, Bath, Maine.  The photograph was used as a Christmas card by Willard Oliver to his sister Nellie. 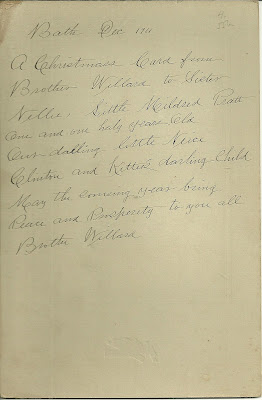 Written on the back of the photograph: Bath, Dec. 1911.  A Christmas Card from Brother Willard to Sister Nellie.  Little Mildred Pratt, one and one half years old.  Our Darling little Niece.  Clinton and Kittie's darling Child.  May the coming year being Peace and Prosperity to you all.  Brother Willard.

Mildred Pratt was born about 1910 in Maine, the daughter of Clinton Fielding Pratt and his wife Kittie B. (Larrabee) Pratt.   I don't have the names of Clinton's parents, but I believe his mother was Ida M. Oliver, the younger sister of Willard and Nellie (Oliver) Erskine, judging from the clues on the reverse of the photograph.  Willard and Nellie had an older sister, Lena, but she married Louis Genthner and raised her family in Massachusetts.

Kittie (Larrabee) Pratt was born about April 1886 in Minnesota, the daughter of Walter and Minnie (?) Larrabee.

By the time of the 1900 Census, Clinton Fielding Pratt was living with his grandmother Philena (?) Oliver and uncle Willard in Bath, Maine.  I don't know what had happened to his parents.

Clinton Fielding Pratt and Kittie B. Larrabee married 17 July 1909.   I don't know if they had other children, in addition to Mildred.  In the 1910 Census, Clinton and Kittie were living with daughter Ruth M. in Bath, Maine.  I'm assuming that the initial M. stood for Mildred, but I can't be sure.   She could have been Ruth Mildred Pratt or Mildred Ruth Pratt, or neither.

By the 1920 Census, Kittie had apparently divorced Clinton F. Pratt and was living with husband Gordon F. Preble and her daughter Mildred Pratt in Woolwich, Maine.  In 1920 Clinton Pratt married Bertha M. Crosman and had at least two more children with her.

As for Mildred Pratt, I lost track of her with the 1920 Census.   Interestingly, I found an entry in the Maine Marriages online database for the marriage of Mildred F. Preble of Bath, Maine, and James F. Cameron of Ohio, in 1928; and another for Mildred F. Preble of Bath and John H. Stuart of Bath in 1935.   However, if our Mildred is Mildred Ruth or Ruth Mildred, she wouldn't have the initial F.  Never say never, though.

Posted by Pam Beveridge at 6:53 PM