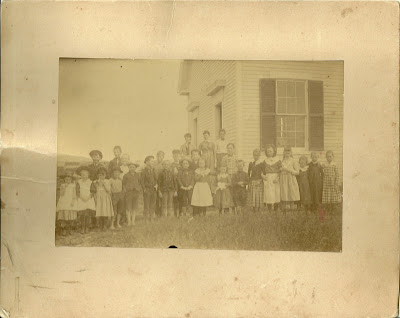 Late 19th or early 20th century photograph of schoolchildren taken by the Pollard studio of Dover, Maine.  Sadly, no one in the photograph is identified.

The photograph may have been taken at a Dover school or another school in nearby town in Piscataquis or Penobscot counties.  The school appears to be situated on a knoll with a large barn or other building in the background.

In 1922, Dover, on the south side of the Piscataquis River, merged with Foxcroft, a village on the north side, to create the town of Dover-Foxcroft.

If you happen to recognize the teacher, standing near the doorway, or anyone else, from your family albums, please leave a comment in the comments box or contact me directly.

Posted by Pam Beveridge at 3:56 PM