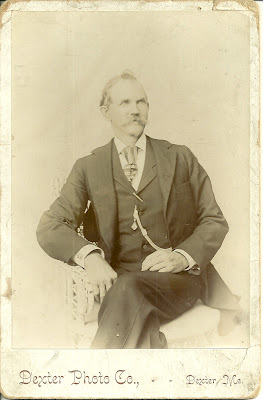 Cabinet photograph of an older man identified on reverse as John Parkman, the grandfather of Hugh. 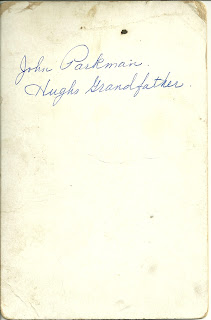 Researching online, I found a lot of information on a John D. Parkman of Palmyra, Maine, which is fairly close to Dexter, Maine.  He was born 10 March 1820, in Maine, the son of John and Lydia (Pratt) Parkman.  He married Dolly Berry and had two sons, Alvin and Elmer.  I wasn't able, however, to find a son Hugh for either of them.

I also found a reference to a John W. Parkman in Charleston, Maine, which is very close to Dexter, Maine.  But it was an Agricultural Census entry, with no family information,  and it's possible that this John Parkman did not actually live in Charleston. I haven't yet found another reference for him.

If you have any information on the further identity of the John Parkman in the photograph, grandfather of Hugh, please leave a comment in the comments box or contact me directly.