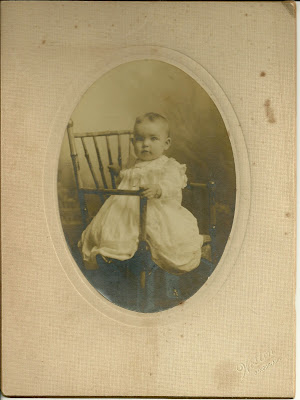 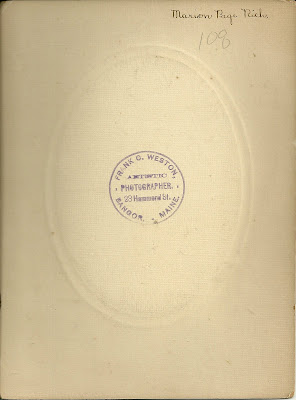 From online research, hopefully correct:
Marion Page Rich was born about 1907 in Maine, possibly Bangor or Eddington, Maine, the daughter of Guy Comins Rich and his wife Margaret A. Page.  Guy Comins Rich was the adopted son of Edward and Eveline (Comins) Rich of Eddington, Maine.
From what I have been able to determine, Guy Comins Rich was the son of Eveline's older brother, Alonzo Barnard Comins and his wife Melissa (Dodge) Comins.  On one Census form, Guy Comins Rich indicated that his mother was born in Vermont, and Melissa (Dodge) Comins was born in Vermont.  However, Alonzo was married at least two other times, and one of his other wives could also have been born in Vermont.
It's possible that Melissa passed away or became unable to take care of her large family, and youngest child Guy was taken in by his aunt Eveline and husband Edward Rich, as was tradition.
The parents of Alonso Barnard Comins were John Spurr Comins and Rosamund Harris (Little) Comins of Eddington, Maine.   I haven't been successful so far in determining the parents of Melissa (Dodge) Comins or even if Dodge was truly her maiden name.
Marion Page Rich's mother, Margaret A. Page was born about 1886 in Maine, the daughter of Albion K. Paris Page and his wife Eliza (Abbott) Page of Eddington, Maine. Margaret's paternal grandparents were James and Penelope Page of Orono, Maine.  Her maternal grandparents were Francis Atherton Abbott and his wife Ann Sabrina (Haskell) Abbott of Eddington, Maine.
I checked on the Maine Marriages Online Database and found a 1924 marriage between a Marion P. Rich in Windham, Maine, and a Ralph S. Grant, also of Windham, though I believe, encouragingly, that he grew up in Eddington, the son of Fred S. Grant and his wife Sylvia L. (Summer) Grant.
In another 17 years, this Marion (Rich) Grant would go on to marry John B. Maddlocks [I believe the entry should read Maddocks] in 1941.  He was born 26 May 1906 in Maine, the son of Willis and Agnes (Bates) Maddocks.
Marion Page Rich died in 1959; John B. Maddocks died in 1992 in Orland, Maine.
Hopefully, a reader will step forward if I'm on the wrong track with Ralph S. Grant and John B. Maddocks and clear up the mystery of Marion Page Rich's marriages, if any.
If you have any corrections, additions or insights regarding the information provided above, please leave a comment in the comments box or contact me directly.
Thanks for stopping by!

Posted by Pam Beveridge at 9:12 AM