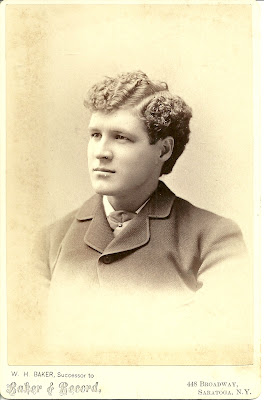 Cabinet photograph of a young man identified on reverse, in what I assume is his own handwriting, as F. M. Lamb.  The photograph was taken by Baker & Record, Photographers, Ground Floor Gallery, 448 Saratoga Springs, New York. 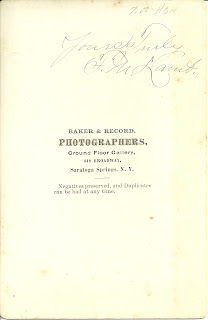 I'm wondering if this is a photograph of Francis Mortimer Lamb, the well known painter of Stoughton, Massachusetts, who was born 5 May 1861 in Middleborough, Massachusetts, the son of Amasa Augustus and Ardelia (Monk) Lamb.  His paternal grandparents were Amasa and Susan Lamb.   I haven't yet determined his mother's parents, though I found her in the 1850 Census of Stoughton, living with what appear to be three siblings in the household of Philip and Sally Wood.  Interestingly, an obituary I read said that she had a Troy, New York connection, which would put her in the neighborhood of Saratoga Springs.


Does this fellow resemble the youth in the photograph above?

It's odd that I also found a famous Stoughton painter by the name of Frederick Mortimer Lamb with the same birth and death dates.

Francis Mortimer Lamb married Rosanna Farrell in 1906.  She was born in July of 1866 in Stoughton, Massachusetts, the daughter of Irish natives John and Rosanna (Sheridan) Farrell.  I believe Francis and Rosanna had two children who died in infancy.

All that said, this could be a completely different F. M. Lamb.  I found a couple instances of a Franklin Lamb, one with parents of Lorenzo and Margaret in Westerlo, New York; the other with parents of Leonard and Susan in Fowler, New York.  There could be many more.

If you recognize this young man from a biography of artist Francis Mortimer Lamb, or from your family albums or research into the Lamb family, please leave a comment in the comments box or contact me directly.

Posted by Pam Beveridge at 2:16 PM