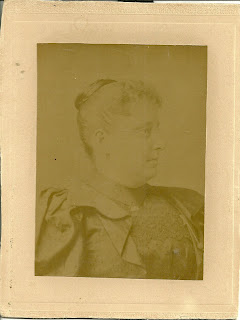 Photograph of a middle-aged woman identified on reverse as Alice Wilder Morse.  Unfortunately, there's no photographer's imprint to give a clue as to locale.  Although perhaps a red herring clue, the photograph was found with a collection of New Hampshire photographs. 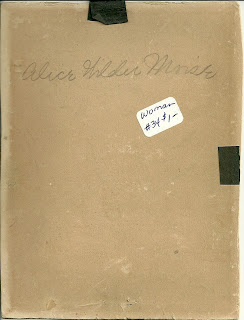 Researching online, I found an Alice Sidney Wilder who married Charles Henry Morse.  Charles has a New Hampshire connection.  However, the lady in the photograph may be a completely different Alice Wilder Morse.  Perhaps Morse is her maiden, rather than married name.  Hopefully a reader will step forward to clear up the mystery.

Assuming the lady is Alice Sidney (Wilder) Morse, here is what I found:

Alice Sidney Wilder was born 30 August 1858 in Hingham, Massachusetts, the daughter of William Crocker Wilder, born in 1829, and his wife Eliza M. (Bates) Crocker, born in 1833, both born in Hingham, Massachusetts.  Alice's paternal grandparents were Crocker and Mary Ann (Spooner) Wilder.  Her maternal grandparents were Eliel and Hannah (Stoddard) Bates.

If you have any corrections, additions or insights regarding the information presented above, especially if you think the lady in the photograph is not the Alice Wilder Morse I've outlined, please make a comment in the comments box or contact me directly.   One thing that concerns me is that the lady in the photograph seems a bit old to have been born in 1858, but the photograph has not been stored well over the years and is very faded, perhaps not a good candidate for reliable dating.