Brochure from Thorp & Martin of Boston, Massachusetts on Eclipse of January 1925 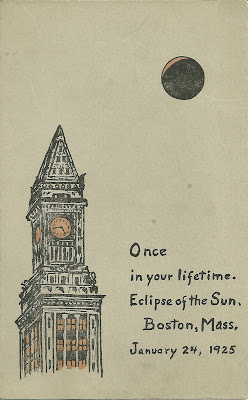 Neat folded cardstock piece printed on the occasion of the January 1925 eclipse.  It originally contained a pair of colored glasses, but those are not present, probably having been used during the eclipse. 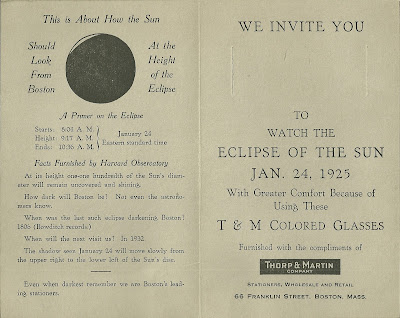 The right pane has slits which were meant to hold the glasses in place.


Facts Furnished by Harvard Observatory
At its height one-one hundredth of the Sun's diameter will remain uncovered and shining.
How dark will Boston be?  Not even the astronomers know.
When was the last such eclipse darkening Boston?
1806 (Bowditch records.)
When will the next visit us?  In 1932.
The shadow seen January 24 will move slowly from the upper right to the lower left of the Sun's disc.


Even when darkest remember we are Boston's leading stationers.


TO WATCH THE
ECLIPSE OF THE SUN
JAN. 24, 1925
With Greater Comfort Because of Using These
T & M COLORED GLASSES
Furnished with the compliments of
THORP & MARTIN
Company
Stationers, Wholesale and Retail
66 Franklin Street, Boston, Mass. 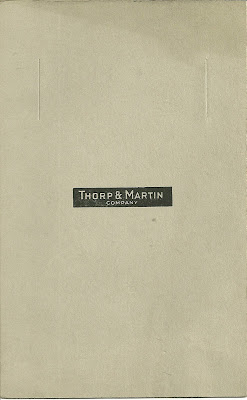 Posted by Pam Beveridge at 5:12 PM