Large Photograph of Harry Cordier, who played in a band on an Atlantic Ocean liner 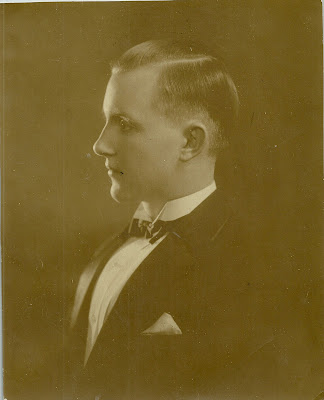 Large photograph of a young man identified on reverse as Harry Cordier, who perhaps had this photograph taken when he was a member of the band on an Ocean liner in the Atlantic, perhaps the Leviathan.  As you can see from the identification below, he was somehow related to a Viola.

Researching online, I found a two different Harold Cordiers in the Scranton, Pennsylania area.  One of them  had an older sister named Viola and parents Jacob and Elizabeth Cordier.   This Harold Cordier was born about 1904.

I found another Harold Cordier, born about the same year, with parents Charles Jr. and May in the 1910 Census; no sister Viola, but she could have been born after the enumeration.

Or our Harry could have been neither of these.

If Harry played in a band on the Leviathan, it was probably during the 1920s and 1930s when the ship was made over into an ocean liner from its previous usage as US troop carrier during the war.

If you have any information on the further identification of the Harry Cordier in the photograph, please leave a comment in the comments box or contact directly.

Posted by Pam Beveridge at 7:12 AM