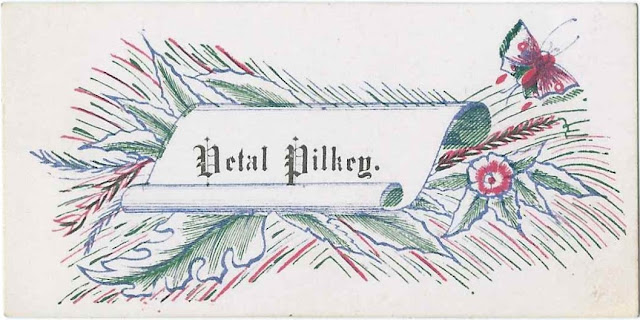 Calling card of Vetal Pilkey.  I believe his surname goes back to Pelletier, presumably Acadian in origin.  I found several possibilities for Vetal, in Piscataquis County, Maine; Aroostook County, Maine; and in the communities along the Maine and New Brunswick border, which was a bit blurry at that time.

The card was found with other calling cards, most from central Maine, which might give some added weight to the Vetal from Piscataquis County, Maine.

I'm leaning toward thinking the owner of the card was the Vetal of Greenville, Maine, based on the closeness of the spelling he used throughout his life and the fact that most of the calling cards in this collection came from central Maine.  But I'd appreciate readers' thoughts.

Amazing to think that when I saw the name on this calling card, I thought I'd have no problem teasing out his identity...

If you have a theory as to the identity of the Vetal Pilkey, please leave a comment or contact me directly.