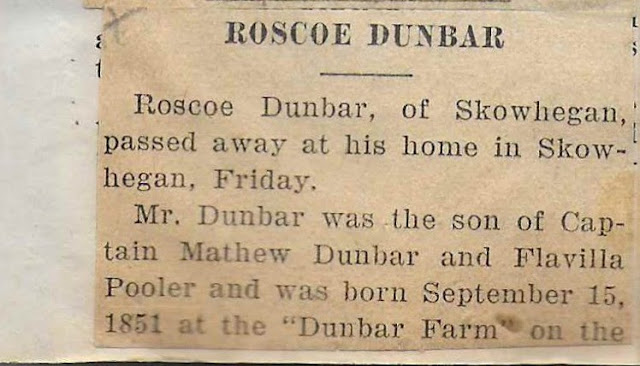 Obituary of Roscoe M. Dunbar of Skowhegan, Maine. He passed away on 12 July 1929.

The obituary is pasted in a scrapbook of items mostly encompassing the Skowhegan, Maine, and Dexter, Maine areas.  The scrapbook pages are warped; as a result, some of the images contain blurs.

If you have additional information on the Dunbar, Pooler and Weston families, please leave a comment.

Roscoe Dunbar, of Skowhegan, passed away at his home in Skowhegan, Friday.

Mr. Dunbar was the son of Captain Mathew Dunbar and Flavilla Pooler and was born September 15, 1851 at the "Dunbar Farm" on the river road, about two miles north of Hinckley. The greater part of his life was passed there until about 10 years ago, when he purchased the place in Skowhegan, living there with his son Roy until his death July 12th. He married Hannah Weston Sept. 29, 1877 and to them five children were born, all of whom are living: Ernest, Roy and Carlton, of Skowegan, Mrs. Walter E. Palmer, of Hinckley and Mrs. Harold W. Joy of South Winham [presumably South Windham]. Mr. Dunbar was one of 10 children, John, George, Charles, Sarah, Clara, one who died in infancy, Elwin, Evelyn, Roscoe and Cora. One brother, Edwin, has made his home with the deceased and the five children, he leaves seven grandchildren, Willard, Arthur and Evelyn Dunbar of Skowhegan, Norman [,] Albert and Mary Palmer of Hinckley and Wendall Dunbar Joy of South Windham.  He has had a long illness. He was tenderly cared for by his son, Roy, and housekeeper, Mrs. Cecelia Grenier, the latter having been in the family for 15 years.  Mr. Dunbar was a kind neighbor and in the years he lived on the farm made many friends here.

The funeral service was conducted by Rev. George Merriam of Skowhegan. Interment was at Southside cemetery. The bearers were Reuben French and Fred Pooler of Skowhegan, Bert [Reed ?] of Waterville and Melvin Palmer of Hinckley. [two of the bearers' names were obscured]

Posted by Pam Beveridge at 6:08 AM