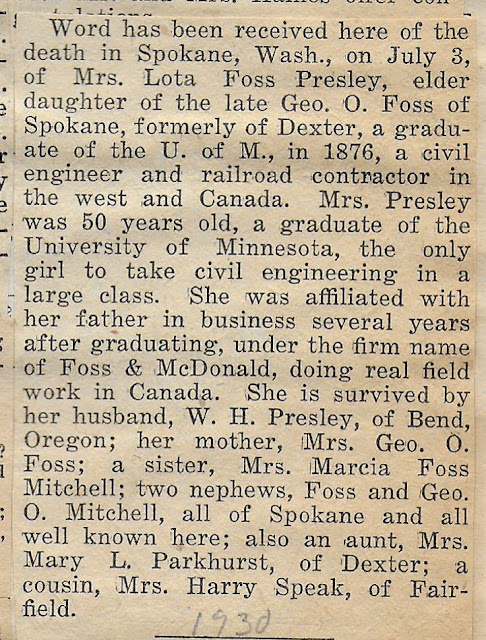 The clipping is pasted in a scrapbook of items mostly from the area encompassing Skowhegan, Maine, and Dexter, Maine.

Word has been received here of the death in Spokane, Wash., on July 3, of Mrs. Lota Foss Presley, elder daughter of the late George O. Foss of Spokane, formerly of Dexter, a graduate of the U. of M. in 1876, a civil engineer and railroad contractor in the west and Canada.  Mrs. Presley was 50 years old, a graduate of the University of Minnesota, the only girl to take civil engineering in a large class. She was affiliated with her father in business several years after graduating, under the firm name of Foss & McDonald, doing real field work in Canada.  She is survived by her husband, W. H. Presley, of Bend, Oregon; her mother, Mrs. Geo. O. Foss; a sister, Mrs. Marcia Foss Mitchell; two nephews, Foss and Geo. O. Mitchell, all of Spokane and all well known here; also an aunt, Mrs. Mary L. Parkhurst, of Dexter; a cousin, Mrs. Harry Speak of Fairfield.
[handwritten] 1930

If you have information to share on any of the people mentioned above, please leave a comment.