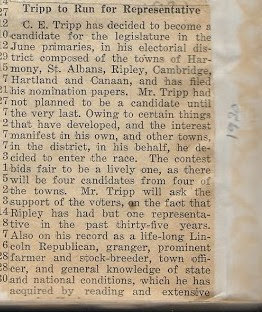 1930 newpaper clipping about the candidacy of Clarence Eugene Tripp (1860-1939) for the Republican primary for the Maine Legislative District that covered six towns: Cambridge, Canaan, Harmony, Hartland, Ripley and St. Albans.

The primary results show Tripp in last place among the four candidates.

The clipping is pasted in a scrapbook of items mostly from the area encompassing Skowhegan, Maine, and Dexter, Maine.

C. E. was the son of Paschal M. Tripp (1829-1863) and Lucy Ann (Goodale) Tripp (1837-1888).  Paschal Tripp served in the 20th Maine and died in the Battle of Gettysburg and is buried there, according to a blog post with much information about the Tripp family in Ripley.

There's a record in the Maine, Nathan Hale Cemetery Collection, 1780-1980, for "Pascal" M. Tripp, buried in the Goodale Cemetery in Ripley, Maine, but perhaps this is for a cenotaph or perhaps the family had his body disinterred from the battlefield and returned home.

Clarence Eugene Tripp married Martha I. Prescott in Massachusetts in Boston, Massachusetts, on 19 October 1887.  Apparently he went by "Eugene". According to the marriage record, Martha was born in Dover, Maine.  She was the daughter of Noah Morrill Prescott and Martha (Nutter) Prescott, who at some point moved the family to St. Albans, Maine.  By the time of the 1930 Census, Clarence Eugene Tripp and Martha I. (Prescott) Tripp had divorced.

If you have information on the Tripp and Goodale families of Ripley, please leave a comment.

Tripp to Run for Representative

C. E. Tripp has decided to become a candidate for the legislature in the June primaries, in his electorial district composed of the towns of Harmony, St. Albans, Ripley, Cambridge, Hartland and Canaan, and his filed his nomination papers.  Mr. Tripp had not planned to be a candidate until the very last.  Owing to certain things that have developed, and the interest manifest in his own, and other towns, in the district, in his behalf, he decided to enter the race.  The contest bids fair to be a lively one, as there will be four candidates from four of the towns.  Mr. Tripp will ask the support of the voters, on the fact that Ripley has had but one representative in the past thirty-five years.  Also on his record as a life-long Lincoln Republican, granger, prominent farmer and stock-breeder, town officer, and general knowledge of the state and national conditions, which he has acquired by reading and extensive travel. He is a graduate of Dexter High school and of Eastman College, Poughkeepsie, N.Y.  He was in college at the time Garfield was elected president and remembers well the great enthusiasm that prevailed among the seven hundred college boys on election day, who were about evenly divided in their support of Gen. Garfield and Gen. Hancock.  Mr. Tripp cast his first vote for president in 1884 for James G. Blaine. He was a great admirer and follower of Theo Roosevelt and labored hard in his support in 1912.

He has always been active in everything pertaining to the benefit of his native town.  He was one of the founders of the Ripley Tel. Co., and has held all of the different offices in the company.  He has held town office for 47 years and has filled nearly every office from highway surveyor to first selectman.  He has been moderator at 26 town meetings and for the last fifteen years has been town auditor, which office he still holds. He has been a prominent Grange and Pomona member for thirty years.

Mr. Tripp's life has been devoted to farming and the raising of Percheron colts and Holstein cattle.  He was one of the first to breed registered Holsteins in this part of Maine.  He is an avowed dry and believer in the enforcement of all laws. He opposed the exporting of the water power, also the gas tax, and believes in the pay as you go plan for the construction of roads.  He believes in an army and navy of sufficient size and strength to afford sufficient national protection at all times and under all conditions.  He believes in a strong protective tariff for New England and is opposed to the entrance of the United States into the World Court.  He believes that the Maine delegation in Congress is sadly in need of a little more back bone. And for this reason he is booming his life-long friend Ralph O. Brewster, for the United States Senate.

Mr. Tripp has traveled from the Atlantic to the Pacific visiting nearly all parts of the United States. He has visited Cuba, Panama, Mexico and the Central American States.  He has acquired much valuable knowledge in his contact with people in different places he has visited.  He believes, however, that taken all in all, there is no better place for a permanent home than the Pine Tree State.