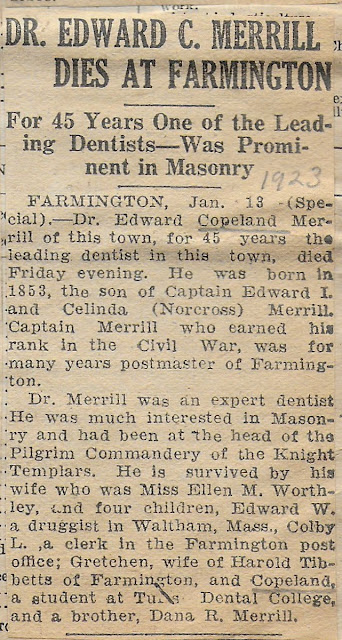 The obituary is pasted in a scrapbook of items mostly from the area encompassing Skowhegan, Maine, and Dexter, Maine, with a few outside.

DR. EDWARD C. MERRILL DIES AT FARMINGTON
For 45 Years One of the Leading Dentists - Was Prominent in Masonry
[handwriting: 1923]

FARMINGTON, Jan 13 - (Special). - Dr. Edward Copeland Merrill of this town, for 45 years the leading dentist in this town, died Friday evening. He was born in 1853, the son of Captain Edward I. and Celinda (Norcross) Merrill. Captain Merrill who earned his rank in the Civil War, was for many years postmaster of Farmington.

Dr. Merrill was an expert dentist. He was much interested in Masonry and had been at the head of the Pilgrim Commandery of the Knight Templars. He is survived by his wife who was Miss Ellen M. Worthley, and four children, Edward W., a druggist in Waltham, Mass., Colby L., a clerk in the Farmington post office; Gretchen, wife of Harold Tibbetts of Farmington, and Copeland, a student at [obscured, but presumably Tufts] Dental College, and a brother, Dana R. Merrill.

Edward Copeland Merrill, his wife and other relatives are buried in the Riverside Cemetery at Farmington, Maine.

If you have information to share on any of the people mentioned above, please leave a comment.

Posted by Pam Beveridge at 5:28 AM