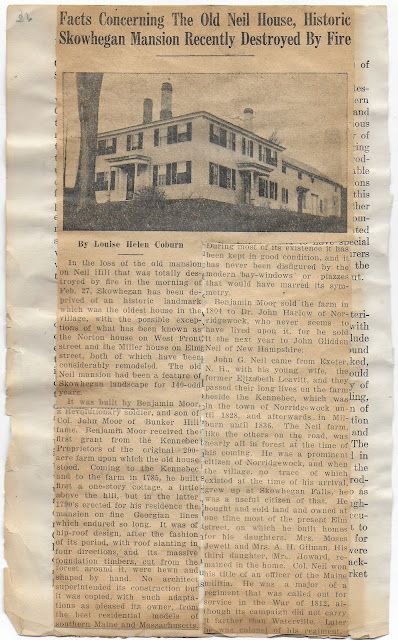 2 newspaper Clippings from the late 1930s about the destruction by fire of the historical Neil House at Skowhegan, Maine.

Found pasted in a scrapbook of items mostly from the area encompassing Skowhegan, Maine, and Dexter, Maine.

One article was written by Louise Helen Coburn (1856-1949), who was the daughter of Congressman Stephen Coburn and mentioned in the obituary of Sarah Frances (Coburn) Turner (1843-1931).

The other was entitled "Former Father Lacroix House on Norridgewock Ave. Destroyed by Fire" 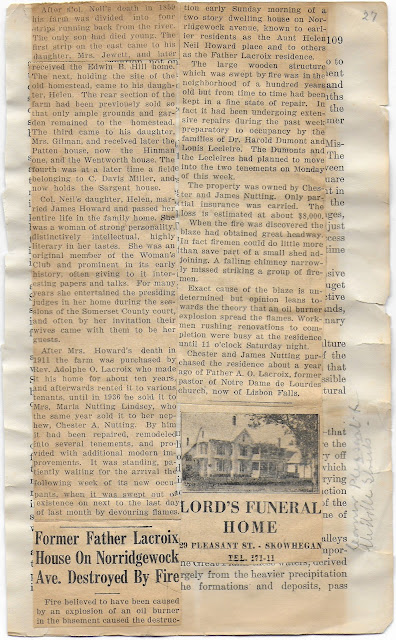 In the loss of the old mansion on Neil Hill that was totally destroyed by fire in the morning of Feb. 27, Skowhegan has been deprived of an historic landmark which was the oldest house in the village, with the possible exception of what has been known as the Norton house on West Front street and the Miller house on Elm street, both of which have been considerably remodeled. The old Neil mansion had been a feature of Skowhegan landscape for 140-odd years.

It was built by Benjamin Moor, a Revolutionary soldier, and son of Col. John Moor of Bunker Hill fame. Benjamin Moor received the first grant from the Kennebec Proprietors of the original 200 acre farm upon which the old house stood. Coming to the Kennebec and to the farm in 1785, he built first a one-story cottage, a little above the hill, but in the latter 1790s erected for his residence the mansion on fine Georgia lines which endured so long. It was of hip-roof design, after the fashion of its period, with roof slanting in four directions, and its massive foundation timbers, cut from the forest around it, were hewn and shaped by hand. No architect superintended its construction but it was copied, with such adaption as pleased its owner, from the best residential models of southern Maine and Massachusetts.

During most its existence it has been kept in good condition, and it has never been disfigured by the modern 'bay-windows' or piazzes that would have marred its symmetry.

Benjamin Moor sold the farm in 1804 to Dr. John Harlow of Norridgewock, who never seems to have lived upon it, for he sold it the next year to John Glidden Neil of New Hampshire.

John G. Neil came from Exeter, N.H., with his young wife, the former Elizabeth Leavitt, and they passed their long lives on the farm beside the Kennebec, which was in the town of Norridgewock until 1828, and afterwards in Milburn until 1836.  The Neil farm, like the others on the road, was nearly all in forest at the time of his coming. He was a prominent citizen of Norridgewock, and when the village, no trace of which existed at the time of his arrival, grew up at Skowhegan Falls, he was a useful citizen of that. He bought and sold land and owned at one time most of the present Elm street, on which he built homes for his daughters. Mrs. Moses Jewett and Mrs. A. H. Gilman. His third daughter, Mrs. Howard, remained in the home. Col. Neil won his title of an officer of the Maine militia. He was a major of a regiment that was called out for service in the War of 1812, although its campaign did not carry it farther than Waterville. Later he was colonel of his regiment.

After Col. Neil's death in 1859 his farm was divided into four strips running back from the river.  The only son had died young. The first strip on the east came to his daughter, Mrs. Jewett, and later received the Edwin B. Hill home. The next, holding the site of the old homestead, came to his daughter, Helen. The rear section of the farm had been previously sold so that only ample grounds and garden remained to the homestead.

The third came to his daughter, Mrs. Gilman, and received later the Patten house, now the Hinman one, and the Wentworth house. The fourth was at a later time a field belonging to C. Davis Miller, and now holds the Sargent house.

Col. Neil's daughter, Helen, married James Howard and passed her entire life in the family home. She was a woman of strong personality, distinctively intellectual, highly literary in her tastes. She was an original member of the Woman's Club and prominent in its early history, often giving to it interesting papers and talks. For many years she entertained the presiding judges in her home during the sessions of the Somerset County court, and often by her invitation their wives came with them to be her guests.

After Mrs. Howard's death in 1911, the farm was purchased by Rev. Adolphe O. Lacroix who made it his home for about ten years and afterwards rented it to various tenants, until 1936 he sold it to Mrs. Maria Nutting Lindsey, who the same year sold it to her nephew, Chester A. Nutting. By him it had been repaired, remodeled into several tenements, and provided with additional modern improvements. It was standing, patiently waiting for the arrival of the following week of its new occupants, when it was swept out of existence on next to the last day of last month by devouring flames.

Mentioned in the article:

Fire believed to have been caused by an explosion of an oil burner in the basement caused the destruction early Sunday morning of a two-story dwelling house on Norridgewock avenue, known to earlier residents as the Aunt Helen Neil Howard place and to others as the Father Lacroix residence.

The large wooden structure which was swept by fire was in the neighborhood of a hundred years old but from time to time had been kept in a fine state of repair. In fact it had been undergoing extensive repairs during the past week preparatory to occupancy by the families of Dr. Harold Dumont and Louis Lecleire.  The Dumonts and the Lecleires had planned to move into the two tenements on Monday of this week.

The property was owned by Chester and James Nutting. Only partial insurance was carried. The loss is estimated at about $8,000. When the fire was discovered the blaze had obtained great headway. In fact firemen could do little more than save part of a small shed adjoining.  A falling chimney narrowly missed striking a group of firemen.

Exact cause of the blaze is undetermined but opinion leans towards the theory that an oil burner explosion spread the flames. Workmen rushing renovations to completion were busy at the residence until 11 o'clock Saturday night.

Chester and James Nutting purchased the residence about a year ago of Father A. O. Lacroix, former pastor of Notre Dame de Lourdes church, now of Lisbon Falls.

Mentioned in the article:

If you have corrections and/or additions to any of the information above, please leave a comment.