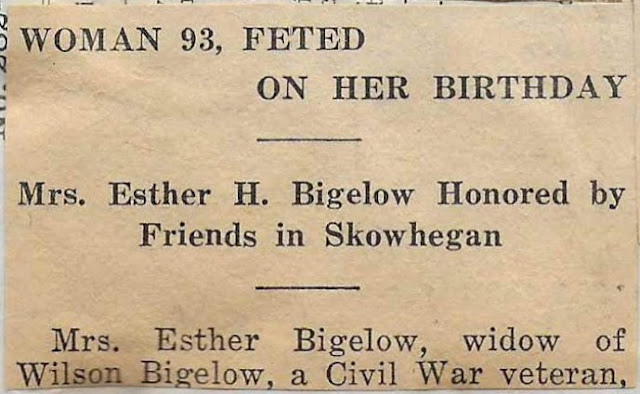 Esther married Civil War veteran Wilson Bigelow (1842-1904) shortly after the war's end; they divorced in 1876 after having had, I believe, four children.  Wilson later married Lydia A. Morrell and had more children.

The clipping is pasted in a scrapbook of items mostly from the area encompassing Dexter, Maine, and Skowhegan, Maine.

Mrs. Esther Bigelow, widow of Wilson Bigelow, a Civil War veteran, quietly observed her 93d birthday Monday, at the home of her son and wife, Mr. and Mrs. Roscoe G. Bigelow, in Skowhegan on the Old Road to Athens.  Mrs. Bigelow is in excellent health for her years and is beloved in the neighborhood where she has resided for the past 36 years.

She was born in St. Albans, one of the ten children of Sullivan Lothrop, Jr., and Susan Bigelow Lothrop. Her father was one of the first settlers of St. Albans and prominent in that section of Maine. He built a dam, a tannery and a home for his family, accumulating considerable property, which was swept away by fire and freshet and by his assisting friends financially and having to pay their notes. He was a member of the State Legislature two terms and performed 90 marriages in his lifetime. He died in 1882 and his wife in 1891.

Mrs. Bigelow attended the schools of St. Albans and later in 1857 was graduated from Hartland High school. She was in Wisconsin for three years with her sister, L. Maxwell, and in 1862 went to Washington D.C., where she resided during the Civil War. She kept house for her brother, Mellen Lothrop, who was at that time working in the treasury department. Another brother, Daniel Lothrop, was in the post office department and worked there until his death in October 1919. While there she was privileged to meet President Lincoln at a reception at the White House. She assisted some in caring for wounded soldiers brought back from the front.

In 1866, some time after she returned from Washington, she was married to Wilson Bigelow. Mr. Bigelow, after two years' service in the war, re-enlisted for another year and was severely injured in the first battle losing his right arm. They were the parents of four children, two of whom survive: Roscoe G. Bigelow, Skowhegan, and Sullivan Bigelow of Bradford, Conn. Her husband is deceased.

Mrs. Bigelow takes pleasure in showing a quilt she made when she was 78, from premium ribbons which her son, Roscoe, had won for Durham cattle and corn exhibited at Somerset agricultural fairs and at the Maine State Fair. The premium ribbons represent between $2700 and $2800 won by Mr. Bigelow. The quilt is one yard 37 inches by 37" in size and is beautifully embroidered together with fancy stitches.

If you have corrections and/or additions to the information above, especially information on "L. Maxwell" and the death and resting place of Roscoe G. Bigelow, please leave a comment.