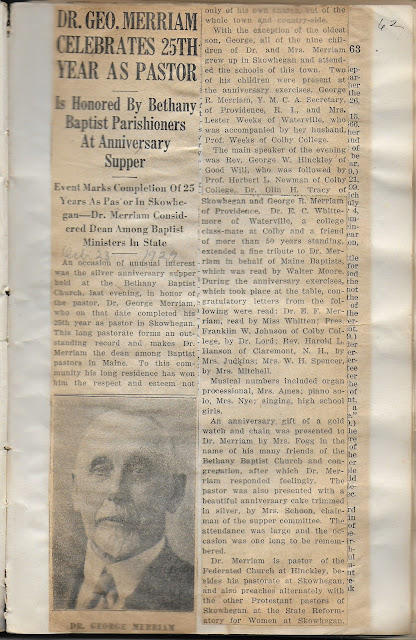 Found pasted in a scrapbook of items dealing mostly with the areas encompassing Dexter, Maine, and Skowhegan, Maine.

Dr. Merriam, wife Eugenia and several of their children are buried in the Southside Cemetery in Skowhegan, Maine.

If you have information on the Merriam, Ward, Rennell and/or Wallace families, or any of the people mentioned below, please leave a comment.

An occasion of unusual interest was the silver anniversary supper held at the Bethany Baptist Church, last evening, in honor of the pastor, Dr. George Merriam, who on that date completed his 25th year as pastor in Skowhegan. This long pastorate forms an outstanding record and makes Dr. Merriam the dean among Baptist pastors in Maine. To this community his long residence has won him the respect and esteem not only of his own church, but of the whole town and country-side.

With the exception of the oldest son, George, all of the nine children of Dr. and Mrs. Merriam grew up in Skowhegan and attended the schools of this town. Two of his children were present at the anniversary exercises, George R. Merriam, Y.M.C.A. Secretary, of Providence, R.I., and Mrs. Lester Weeks of Waterville, who was accompanied by her husband, Prof. Weeks of Colby College.

An anniversary gift of a gold watch and chain was presented to Dr. Merriam by Mrs. Fogg in the name of his many friends of the Bethany Baptist Church and congregation, after which Dr. Merriam responded feelingly. The pastor was also presented with a beautiful anniversary cake trimmed in silver, by Mrs. Schoon, chairman of the supper committee. The attendance was large and the occasion was one long to be remembered.

Dr. Merriam is pastor of the Federated Church at Hinckley, besides his pastorate at Skowhegan, and also preaches alternately with the other Protestant pastors of Skowhegan at the State Reformatory for Women at Skowhegan.

Besides these services, he is teacher of the Men's Class of the Bethany church. He continues to hold the regular mid-week prayer meeting Thursday evening each week, this being the only Protestant church in town holding mid-week services now.