Interview with Samuel Dorr Edes (1844-1921), Last Survivor of the Edes Printing Dynasty, Dating to the Boston Gazette of 1754 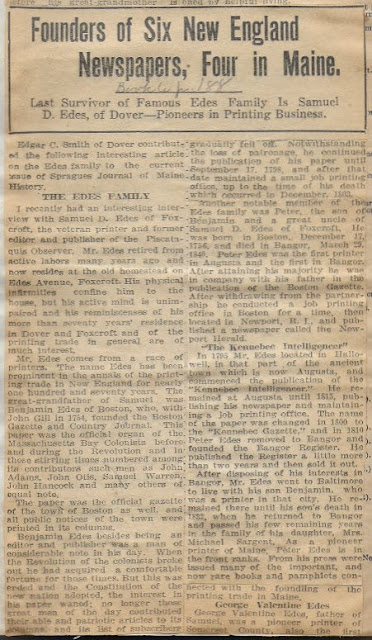 Interview with Samuel Dorr Edes (1844-1921), last of the line of the historic Edes family of printers, starting with Benjamin Edes, who co-founded the Boston Gazette in 1754.

The clipping is pasted in a scrapbook of items mostly from the areas around Skowhegan, Maine, and Dexter, Maine, with a few from outside.

Edgar C. Smith of Dover contributed the following interesting article on the Edes family to the current issue of Spragues Journal of Maine History.

THE EDES FAMILY
I recently had an interesting interview with Samuel D. Edes of Foxcroft, the veteran printer and former editor and publisher of the Piscataquis Observer.  Mr. Edes retired from active labors many years ago and now resides at the old homestead on Edes Avenue, Foxcroft.  His physical infirmities confine him to the house, but his active mind is unimpaired and his reminiscences of his more than seventy years' residence in Dover and Foxcroft and of the printing trade in general are of much interest.

Mr. Edes comes from a race of printers. The name Edes has been prominent in the annals of the printing trade in New England for nearly one hundred and seventy years. The great-grandfather of Samuel was Benjamin Edes of Boston, who, with John Gill in 1754, founded the Boston Gazette and Country Journal. This paper was the official organ of the Massachusetts Bay Colonists before and during the Revolution and in those stirring times numbered among its contributors such men as John Adams, John Otis, Samuel Warren, John Hancock and many others of equal note.

The paper was the official gazette of the town of Boston as well, and all public notices of the town were printed in its columns.

Benjamin Edes besides being an editor and publisher was a man of considerable note in his day.  When the Revolution of the colonists broke out he had acquired a comfortable fortune for those times. But this was ended and the Constitution of the new nation adopted, the interest in his paper waned; no longer those great men of the day contributed their able and patriotic articles to its columns and its list of subscribers gradually fell off.  Notwithstanding the loss of patronage, he continued the publication of his paper until September 17, 1798, and after that date maintained a small job printing office, up to the time of his death which occurred in December, 1803.

Another notable member of the Edes family was Peter, the son of Benjamin and a great uncle of Samuel D. Edes of Foxcroft. He was born in Boston, December 17, 1756, and died in Bangor, March 29, 1840.  Peter Edes was the first printer in Augusta and the first in Bangor. After attaining his majority he was in company with his father in the publication of the Boston Gazette. After withdrawing from the partnership he conducted a job printing office in Boston for a time, then located in Newport, R.I., and published a newspaper called the Newport Herald.

"The Kennebec Intelligencer"
In 1795 Mr. Edes located in Hallowell, in that part of the ancient town which is now Augusta, and commenced the publication of the "Kennebec Intelligencer". He remained at Augusta until 1815, publishing his newspaper and maintaining a job printing office.  The name of the paper was changed in 1800 to the "Kennebec Gazette", and in 1810 Peter Edes removed to Bangor and founded the Bangor Register. He published the Register a little more than two years and then sold it out.

After disposing of his interests in Bangor, Mr. Edes went to Baltimore to live with his son Benjamin, who was a printer in that city. He remained there until his son's death in 1832, when he returned to Bangor and passed his few remaining years in the family of his daughter, Mrs. Michael Sargent.  As a pioneer printer of Maine, Peter Edes is in the front ranks.  From his press were issued many of the important, and now rare books and pamphlets connected with the founding of the printing trade in Maine.

George Valentine Edes
George Valentine Edes, father of Samuel, was a pioneer printer of Somerset County, also the first printer to locate in the County of Piscatquis. He was born in Boston, February 14, 1797, and died in Foxcroft, November 26, 1875. His father died in 1895 [printer error] when George was but eight years of age, and he was placed in the family of his uncle, Peter Edes. In 1810, when but thirteen years of age, he commenced his apprenticeship in his uncle's officer at Augusta. In 1815 when his uncle Peter removed to Bangor, he remained with him and was employed at the printing office there until 1817, when Peter Edes sold out.

After this, George returned to Hallowell and worked for a time in the office of Ezekiel Goodale.  In 1823, in company with Thomas J. Copeland, they established the first printing office in Somerset County at Norridgewock and commenced the publication of the Somerset Journal.

This partnership continued only about a year and a half when Mr. Copeland purchased the Edes interest. Mr. Edes, however, continued as an employe until 1836. In 1838 when Piscataquis County was incorporated George V. Edes came to Dover and opened a printing office and commenced the publication of the Piscataquis Herald, the first number being issued June 1, 1838.

Espoused Whig Cause
This paper espoused the Whig cause and it is said to have been the first newspaper in the Country to advocate the nomination of William Henry Harrison for the presidency.  In 1842 the name was changed to the Piscataquis Farmer, and again, in November, 1847, the name was changed to the Piscataquis Observer under which title it has ever since made its weekly appearance.  From 1838 until some time in the early 70's George V. Edes was the sole proprietor and publisher of this paper but at that time a partnership was formed with his son Samuel D. Edes, under the firm name of G. V. Edes & Son.

On January 1, 1875, Fred D. Barrows was admitted as a partner and the firm name changed to Edes & Barrows.  After the death of the senior member of the firm, in November of that year, Samuel D. Edes took over his father's interest and the publication of the paper was continued under the firm name of Edes & Barrows until 1888, when the Observer Publishing Company was formed, and Samuel D. Edes retired from active interest in the Observer, although for a number of years he acted as editor of the paper.  Another brother, George A. Edes, learned the printer's trade and when a young man located in a South Dakota town and established a newspaper there; after he removed to Morgan Hill, California and twenty two years ago established in the latter town the Morgan Hill Times which is still published by Mr. Edes' successor in business, having died about eleven years ago.

It is doubtful if another family in the State of Maine can boast of such a record. The founding of six New England newspapers, four of which were State of Maine publications, the establishing of four pioneer printing offices in Maine, in localities were none before existed, are achievements worthy of a permanent memorial. The last survivor in the State of this family of printers is Samuel D. Edes, above referred to. He learned his trade in his father's cases. Learned every phase of this business as those old-time printers always did, they edited the newspaper, were compositor and pressman and in many instances were printer's devil. They are a type of a bygone day and only a scattered few of these veterans like Mr. Edes remain to link the present with the past.

If you have information on any of the people mentioned above, please leave a comment.

Posted by Pam Beveridge at 9:15 AM