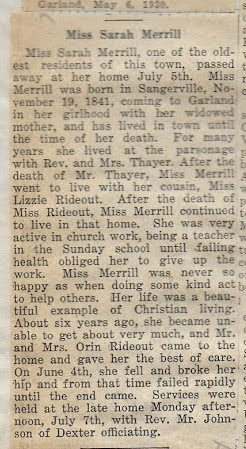 The obituary is pasted in a scrapbook of items mostly from the area encompassing Skowhegan, Maine, and Dexter, Maine, with a few from other areas in Maine and beyond.

According to a record of the Merrill Family in the Maine, Nathan Hale Cemetery Collection, ca. 1780-1980, Sarah J. Merrill was born in Sangerville, Maine, on November 19, 1841, daughter of David and Hannah Merrill.  Sarah may have been the only one of her parents' children to survive to adulthood.

Sarah died on July 5, 1930; she, her parents and 3 siblings are buried in the Franklin Taylor lot in Evergreen Cemetery in Garland, Maine.

Miss Sarah Merrill, one of the oldest residents of this town, passed away at her home July 5th.  Miss Merrill was born in Sangerville, November 19, 1841, coming to Garland in her girlhood with her widowed mother, and has lived in town until the time of her death.  For many years she lived at the parsonage with Rev. and Mrs. Thayer.  After the death of Mr. Thayer, Miss Merrill went to live with her cousin, Miss Lizzie Rideout.  After the death of Miss Rideout, Miss Merrill continued to live in that home.  She was very active in church work, being a teacher in the Sunday school until failing health obliged her to give up the work.  Miss Merrill was never so happy as when doing some kind act to help others.  Her life was a beautiful example of Christian living.  About six years ago, she became unable to get about very much, and Mr. and Mrs. Orin Rideout came to the home and gave her the best of care.  On June 4th, she fell and broke her hip and from that time failed rapidly until the end came.  Services were held at the late home Monday afternoon, July 7th, with Rev. Mr. Johnson of Dexter officiating.

Posted by Pam Beveridge at 6:37 AM