1905 Photograph of Mabel Maude Porter of Eustis, Maine; a student at Bates College 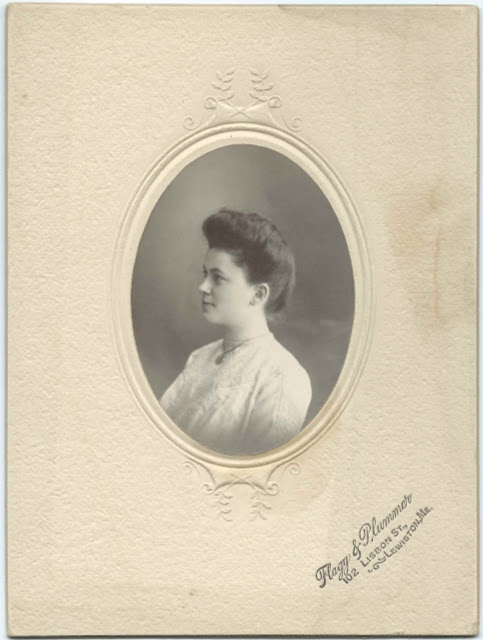 1905 photograph of Mabel Maude Porter of Eustis, Maine, then a student at Bates College.  She graduated in 1907.  The photograph was taken by the studio of Flagg and Plummer at 102 Lisbon Street, Lewiston, Maine. 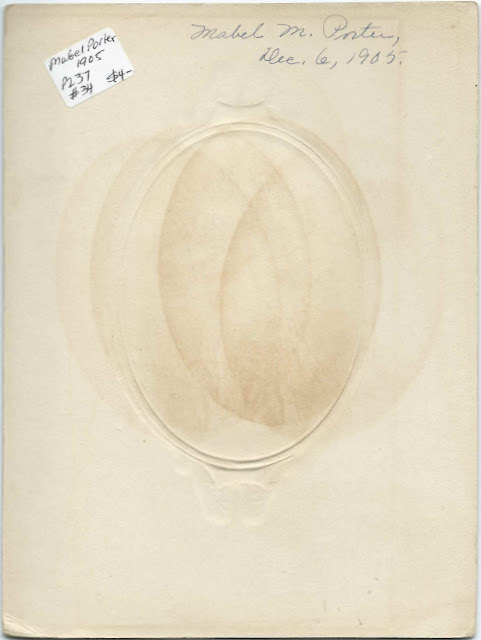 Mabel Maude Porter was born 12 August 1883 at Eustis, Maine, the daughter of Florian Leroy Porter and Emma M. (Parsons) Porter, who were born at Salem, Maine, and Eustis, Maine, respectively.

The History of the State Normal School at Farmington, Maine, written by George Colby Purington and published in 1889, mentions that former student Emma M. Parsons taught after graduation and then married Florian L. Porter in 1878.  He had returned to Maine from Indiana, where he was working as a jeweler, to regain his health.  Emma and Florian had a son Ernest Albee Porter, born on 28 October 1879, and Mabel Mabel Porter on 12 August 1883, as mentioned above.  Emma also served as Town Clerk at Eustis, Maine.

According to a Bates College publication in 1915, after Mabel Maude Porter's graduation in 1907, she taught school at Derby, Vermont; Edward Little High School at Auburn, Maine; West Haven, Connecticut; and Paterson, New Jersey.    Her address was given as Broad Street, which I assume was in Paterson, New Jersey.  The 1920 Census of Paterson lists a Maine-born Mabel Porter, who was working as a teacher.

After the 1920 Census, I lost track of Mabel.  She may have married.

Online trees have her married to Henry Nash Dickinson, but no date or sources are given, and I couldn't find a record verifying the marriage.  I did find a record for the 1925 marriage of John A. Soule of Woolwich, Maine, and Mabel M. Porter of Moreboro [likely a misreading], Massachusetts, but I don't know if she was the Mabel M. Porter I'm researching.

If you have corrections to the information above, or additions to it, please leave a comment or contact me directly.

Posted by Pam Beveridge at 5:14 PM