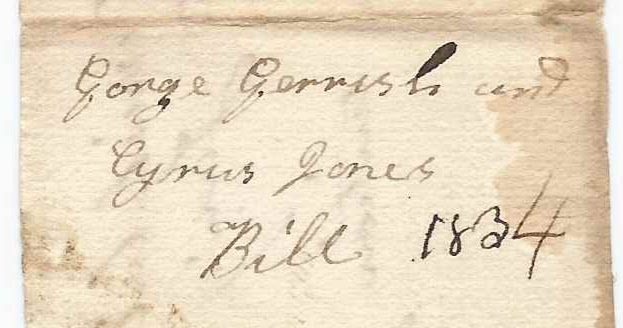 I'm trying to figure out the purpose of this document and could use your input.
From online research, hopefully correct:  [corrections and additions welcome!]

There was a Captain George Gerrish who was born at Dover, New Hampshire, on October 19, 1775, the son of George and Mary (James) Gerrish.  The year after young George's birth, the family moved to Lebanon, Maine.  The "Captain" designation came from the younger George's service in the York County, Maine, Militia.  He died at Chelsea, Massachusetts, on January 26, 1850.

There was a Cyrus Jones born at Lebanon, Maine, on May 18, 1812, the son of Stephen and Eunice Jones.  At the time of the 1850 Census, he was living at Somersworth, New Hampshire with his mother Eunice and wife Sarah W.  Cyrus and Sarah later moved back to Lebanon, Maine, and were enumerated there up through the 1880 Census.  Cyrus died on 27 August 1895 at Lebanon, Maine.

If you have corrections and/or additions to the above information, or if you feel that this document was written somewhere other than Lebanon, Maine, please leave a comment or contact me directly.

Just in case, here is a map of Lebanon, Maine